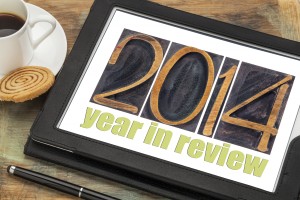 This has been a big year for GMO legislation.  In 2014 alone, 25 states have proposed 67 pieces of legislation aimed either at the labeling of products containing GMOs or at the ban of GMO-containing crops.  While this space has strived to keep you up-to-date with the latest news in the war over GMOs, this scorecard aims to provide a bird's-eye view of the major battlefields...

California: In the November election, voters in Humboldt County widely approved Measure P, which bans the growth of GMO crops in the county.  Yet a statewide GMO labeling bill was rejected by lawmakers in May--the second time in two years such legislation has failed to take hold in the state.

Colorado: Proposition 105--requiring labels on foods that contain GMOs--was overwhelmingly defeated by a roughly 2-1 margin in the November elections.

Connecticut: A GMO labeling bill was passed in May 2013, but is still awaiting to be triggered.  This will only happen once four other states approve related legislation.

Hawaii: While, unlike most other states, Hawaii has had success with GMO measures among voters, getting such measures to stick has been a different story.  In August of this year, a federal judge ruled that a Kauai County ordinance regulating GMO crops was preempted by state and federal regulatory schemes regarding pesticides and GMOs.  That decision is on appeal.  In November, the same federal judge struck down an ordinance in Hawaii County that had imposed restrictions on the "open air cultivation, propagation, development, or testing" of GMO crops, basing his decision on (you guessed it) state and federal preemption.  In the November elections, Maui County voters approved a ballot initiative to temporarily ban genetically engineered crops.  The new law prohibits the growth, testing, or cultivation of GMOs until environmental and health studies declare them safe.   The initiative, which passed by a difference of just 1,077 votes, attracted nearly $8 million from opponents, making it the most expensive campaign in Hawaii's history.  Maui County's GMO ban now faces a legal challenge similar to the ones that brought down Hawaii and Kauai counties' GMO regulations.  This lawsuit will be decided by the same federal judge that decided the Hawaii and Kauai County lawsuits, so we can only guess as to the outcome...

Maine: Like in Connecticut, the state's approved GMO-labeling law has a triggering requirement--it will only go into effect if either four other states pass similar measures or if one or more of the states with a combined population of 20 million adopt similar measures.

Oregon: The state's GMO initiative, Measure 92, failed by a narrow margin in the November elections.  So narrow, in fact, that a recount was automatically triggered, the results of which showed the ballot measure was defeated by a mere 837 votes of the more than 1.5 million cast.  The rejection of Measure 92 came on the heels of the local GMO ban approved in Jackson County, Oregon in May 2014.  On November 18, 2014, owners of two alfalfa farms that grow GMO-enhanced crops filed a lawsuit against Jackson County in an attempt to either overturn the Jackson County measure or to obtain a $4.2 million settlement to cover the costs of lost business.

Vermont: Still the only state to have approved a GMO label law, the law does not go into effect until July 1, 2016, if it can withstand legal challenges.  In May, the Grocery Manufacturers Association (GMA) and several other trade organizations filed a lawsuit against the state, seeking a temporary injunction from the U.S. District Court in order to prevent the state from moving forward with implementation of the law.

Nationwide: While, this year, most of the action involving GMO legislation occurred on a county-wide and state-wide level, 2015 will likely see the fight shift to a national arena.  A GOP-led Congress will consider The Safe and Accurate Food Labeling Act of 2014, a bill that would give ultimate authority of GMO labeling to the Food and Drug Administration.  As we recently reported, this month, the House Energy and Commerce Committee held a hearing to consider the bill and the broader question of federal involvement in GMO labeling.  There appears to be strong Democratic opposition to the bill, however; in fact, Representative Peter DeFazio (D-Ore.) and Senator Barbara Boxer (D-Calif.) have introduced a competing bill that would make GMO food labeling mandatory across the country.  The bill, called the Genetically Engineered Food Right-to-Know Act, is currently supported by 63 representatives and 17 senators.

What will become of GMO legislation that remains tabled, challenged, untriggered, or otherwise stalled?  A new year, a new battleground...