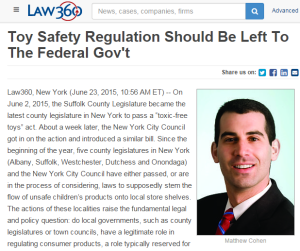 On June 2, 2015, the Suffolk County Legislature became the latest county legislature in New York to pass a “toxic-free toys” act. About a week later, the New York City Council got in on the action and introduced a similar bill. Since the beginning of the year, five county legislatures in New York (Albany, Suffolk, Westchester, Dutchess and Onondaga) and the New York City Council have either passed, or are in the process of considering, laws to supposedly stem the flow of unsafe children’s products onto local store shelves. The actions of these localities raise the fundamental legal and policy question: do local governments, such as county legislatures or town councils, have a legitimate role in regulating consumer products, a role typically reserved for the federal, and in some instances, state governments? Clearly, these local governments believe that they do, as do the consumer and environmental organizations behind the effort. Yet the answer is not as simple as it may seem.

Every so often, frequently in response to sensationalized media reports regarding the prevalence of allegedly unsafe products getting into the hands of children, counties decide to legislate on matters involving consumer product safety, and a trend, similar to the recent one in New York, begins. Unfortunately, these laws introduced and considered by localities tend to be more about politics and headlines than safety and have little effect on actually improving the safety of children’s products.

Even if the motives of the counties and cities are well intentioned, such legislative efforts are simply misplaced; indeed they are unnecessary. Product safety regulation is best left to an impressively and empirically effective “system” of the federal government, consensus standards and the tort and insurance systems, complemented in recent years by the power of online and social media communications. I would argue even state government product safety requirements are often unnecessary, confusing and undermine the national market for the sale of consumer goods. This system is working; the consumer product safety system is strong — and getting stronger each and every year due to the ever-growing demand of the highly sensitized and safety conscious retail community and, of course, consumers themselves. As commissioner and former acting chairman Robert Adler of the U.S.Consumer Product Safety Commission pointed out at the Senate Commerce Committee hearing on CPSC oversight, there has been a “dramatic drop” in death and injuries to children from consumer products over recent years.

Local attempts to regulate the safety of children’s products tend to raise more questions than answers, causing confusion among both consumers and industry alike. By way of example, earlier this year, on Jan. 7, the executive of Albany County, New York, signed into law “Local Law J,” known as the “Toxic-Free Toys Act,” the most far-reaching local children’s product safety ordinance in recent years (perhaps since multiple cities and counties began prohibiting bisphenol-A, commonly referred to as “BPA,” in baby bottles and sippy cups five or so years ago). The Albany County safe toys law was presumably introduced in response to a report issued two months earlier by “Clean & Healthy New York” and the “New York League of Conservation Voters,” which claimed to have found six heavy metals in children’s products, such as dolls, hair accessories and jewelry. Notwithstanding the fact that the results of that report were vigorously challenged by industry groups as flawed, Albany County enacted the sweeping law.

Specifically, the Albany County law prohibits the sale of “children’s products and apparel,” that contain the following seven chemicals: benzene, lead, mercury, antimony, arsenic, cadmium and cobalt. The law gives Albany County’s Department of Health the power to promulgate regulations in order to implement the law as well as enforcement authority.

Presumably, those regulations will provide manufacturers and retailers with additional guidance regarding the scope of the products covered by the law, the levels at which the listed chemicals are banned and how those levels are measured. Violators of the law are subject to monetary civil penalties.

The consequences of this law are yet to be seen. However, in the interim, the breadth and vagueness of the law raises significant policy questions and issues. How will the county implement the law? What products will be covered? How will the county go about testing children’s products to determine if they comply with the law? Where will the resources to enforce the law come from? What sort of economic effect and impact will this law have on local businesses if they will not be able to sell the same products as their counterparts in neighboring counties? Further, are county scientists equipped to set, evaluate and administer such a program? The answer is, simply, no. In fact, some Albany County officials have admitted that the mere three machines the county has can only detect lead.

Moreover, from a legal perspective, Local Law J raises serious preemption issues. In the case of the Albany County law, its provisions appear to contradict the lead paint and substrate limits imposed by the federal Consumer Product Safety Improvement Act of 2008 (CPSIA) as well as limits for heavy metals in children’s toys as imposed by the mandatory federal toy safety standard ASTM F963 adopted as law in the CPSIA. If such conflicts exist, which law governs and how is industry supposed to respond?

Unsurprisingly, in the case of Albany County, members of the consumer products industry led by groups such as the Toy Industry Association and American Apparel & Footwear Association, have already challenged the law in federal court on preemption grounds. The plaintiff, “Safe to Play Coalition,” has asserted in its lawsuit against Albany County that Congress enacted both the Consumer Product Safety Act and Federal Hazardous Substances Act to ensure nationwide, uniform standards govern the safety of children’s products, as opposed to an uncertain and inefficient patchwork of state and local regulations.

This litigation has been stayed at the behest of the parties until Albany County completes a draft of the regulations implementing the law. In any event, the county has agreed not to enforce the law (scheduled to take effect in January 2016) or any regulations implemented pursuant to it until six months after any court decision or order on the preemption issue (or an appellate order).

The good news is despite such local efforts to regulate these products, the consumer products regulatory regime and safety system, enacted by Congress and implemented by federal agencies such as the Consumer Product Safety Commission (and supplemented by the nongovernmental consensus standards process noted above) is working. The current system in place to ensure the safety of children’s products includes mandatory testing by independent, third party labs, stringent limits on chemicals such as lead and phthalates and a robust toy safety standard mentioned above that addresses the use of heavy metals in children’s toys. In fact, according to the CPSC, in fiscal year 2014, toy recalls remained low, with 30 toy recalls as compared to 172 in fiscal year 2008.

Local governments should resist the urge to regulate the safety of children’s products. The county laws discussed above, such as the Albany County “toxic-free toys” act, are just the latest examples of why ensuring and enhancing the safety of these products is best left to the federal government.