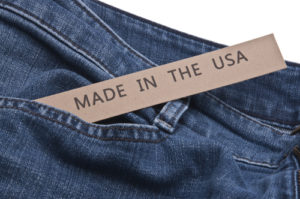 A courtroom battle concerning a manufacturer’s alleged false marketing of allegedly foreign-produced products as “Made in USA” is potentially nearing a resolution.  On November 30, 2015, the lead plaintiff in Paz v. AG Adriano Goldschmied, Inc. et al. asked the court for preliminary approval of a $4 million settlement between class members and defendants Nordstrom, Inc. and AG Adriano Goldschmied Inc. (“AGAG”).  The lawsuit accuses defendants of falsely marketing jeans—manufactured by AG and sold by Nordstrom—as entirely made in America when they allegedly contained foreign components (such as the jeans’ fabric, thread, buttons, and rivets).  Bringing claims under California’s consumer protection laws, plaintiff’s class action complaint alleges that consumers’ belief that domestically-made products are of higher quality than foreign-made products allows defendants to charge a premium for clothes labeled “Made in USA.”

The settlement would block AGAG, the manufacturer, from using the “Made in USA” label on the accused products and would require defendants to provide class members with a $20 voucher or a free pair of pants.  Despite reaching a potential settlement, defendants continue to deny plaintiff’s allegations, as was noted in last Monday’s motion.

According to the motion, the parties reached a deal in late October 2014, after the court rejected defendants’ argument that plaintiff’s claims were preempted by the Federal Trade Commission Act. The FTC Act allows manufacturers to use the “Made in USA” label even if the product contains foreign components as long as it is “all or virtually all” made in the United States.

Back in 2014, when Judge Shaw’s ruling came down, California law was stricter than the FTC Act and prohibited the sale or offering for sale of any merchandise labeled “Made in USA” when the merchandise, or any article, unit, or part thereof, had been entirely or substantially made, manufactured, or produced outside the United States.  In her October 2014 ruling, Judge Dana M. Shaw found that, while federal laws such as the FTC Act are more lenient than California laws in defining when manufacturers can label their products as “Made in USA,” defendants could comply with both laws.  Judge Shaw found that defendants could apply different labels to products sold in California—a fix that “may be burdensome for defendants” but was not “impossible for them to do so.”

While it’s yet undetermined whether the “virtually all” standard under the FTC Act is less than or equal to the 5% and 10% wholesale value limits under the California law, our guess is that the new California regulations will not change the outcome of rulings such as Judge Shaw’s October 2014 ruling.  Courts may still find that manufacturers and retailers may comply with both federal and California law when it comes to labeling their products “Made in USA.”  Stay tuned for updates on similar litigation and the interaction between federal and California “Made in USA” regulations as they are challenged, enforced, and interpreted in the courts.