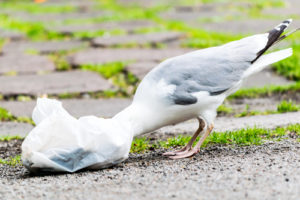 Support and Opposition to the Measure

Proposition 67 actually kept in place Senate Bill 270, legislation that was passed in 2014, which would have gone into effect in January 1, 2015  if a referendum had not delayed the legislations implementation. The plastic bag industry paid for Proposition 67 to qualify for the ballot as a referendum to Senate Bill 270. After the measure landed on the ballot, the plastics industry largely stopped campaigning, suggesting that the referendum was an attempt to delay the law taking effect.

The groups working to protect the ban on plastic bags included environmental groups such as Clean Water Action and the Surfrider Foundation, but also grocery retailing giant Albertsons Safeway and the California Grocers Association. The campaign in favor of the ban argued that the plastic bags were an ecological nuisance and ended up in rivers, streams, oceans and other waterways, which ultimately harmed animal inhabitants and the state’s economy due to coastal tourism.

The same coalition of plastic bag companies, led by the American Plastic Bag Alliance, that pushed to overturn SB 270 also put Proposition 65 on the ballot. Proposition 65 failed by 55 percent and would have sent the proceeds from sales of paper bag alternative packaging to the Environmental Protection and Enhancement Fund for environmental causes.  Because the plastics industry simultaneously attempted to block the ban on carry-out bags and pass the measure that prohibits grocers from keeping the proceeds of the bag sales, many have seen Proposition 65 as an attack on grocers for supporting the bag ban by directing the proceeds to an environmental fund.  Others simply believe the propositions were put on the ballot together to confuse voters or divide the environmentalists and grocers working in favor of Prop. 67.  According to some statements by the groups organized to win a “yes” vote on 67 and a “no” on 65, the two proposals were confusing by design.

For some the ban will not be much of a change either because local ordinances already banned carry-out bags or because small retailers will not be covered by the law. But for those living in municipalities without ordinances, many will be surprised when they no longer hear, “Would you like paper or plastic?”  The ban takes effect immediately, and although some argue the ban is a win for the environment and others argue it is a win for retailers, one takeaway is clear: throw your reusable bags in the trunk or be prepared to pay at least 10 cents for a paper bag!