On March 1, 2014, Circular No. 50, which the Chinese National Health and Family Planning Commission (NHFPC) recently promulgated to regulate the conduct of pharmaceutical and medical device companies that do business in China, went into effect.  Circular No. 50, together with Circular No. 49, which a NHFPC sub-agency issued in December 2013 to regulate the compliance conduct of hospitals in China, follow closely on the heels of the Chinese government’s recent investigation into GlaxoSmithKline’s sales and marketing practices.  Although the extent to which these new circulars will be enforced remains to be seen, pharmaceutical, medical device, and other healthcare companies doing business in China should ensure that their global compliance programs conform to the latest local requirements.

Circular No. 50 updates the NHFPC’s “Rules on the Establishment of Commercial Bribery Blacklists for Purchase and Distribution in the Health Care Industry,” originally released in 2007.  The new circular establishes a revised “blacklist” system for punishing pharmaceutical and medical device companies that engage in bribery, whether or not criminal liability is pursued or any individual is actually convicted of bribery.  A company or its personnel may be blacklisted for any of the following reasons:

Prior to being blacklisted, companies will have an opportunity to defend themselves at a hearing.  Once a company is blacklisted, however, the consequences are crippling:  public hospitals and other state-funded medical institutions in the Chinese province where the bribery occurred will be prohibited from purchasing any goods or services from the blacklisted company for two years.  If a company is blacklisted two or more times within a five-year period, the company will be prohibited from selling its goods or services to any public hospital or medical institution nationwide.

Whereas Circular No. 50 regulates pharmaceutical and medical device companies in the offering of bribes, Circular No. 49, which translates to a “Notice on ‘Nine Prohibitions' to Strengthen Health Care Industry Compliance,” regulates the conduct of hospitals, medical institutions, and their personnel (including physicians) in China, and prohibits the acceptance of bribes, kickbacks or other improper payments.  The “Nine Prohibitions” roughly translate to the following prohibitions: 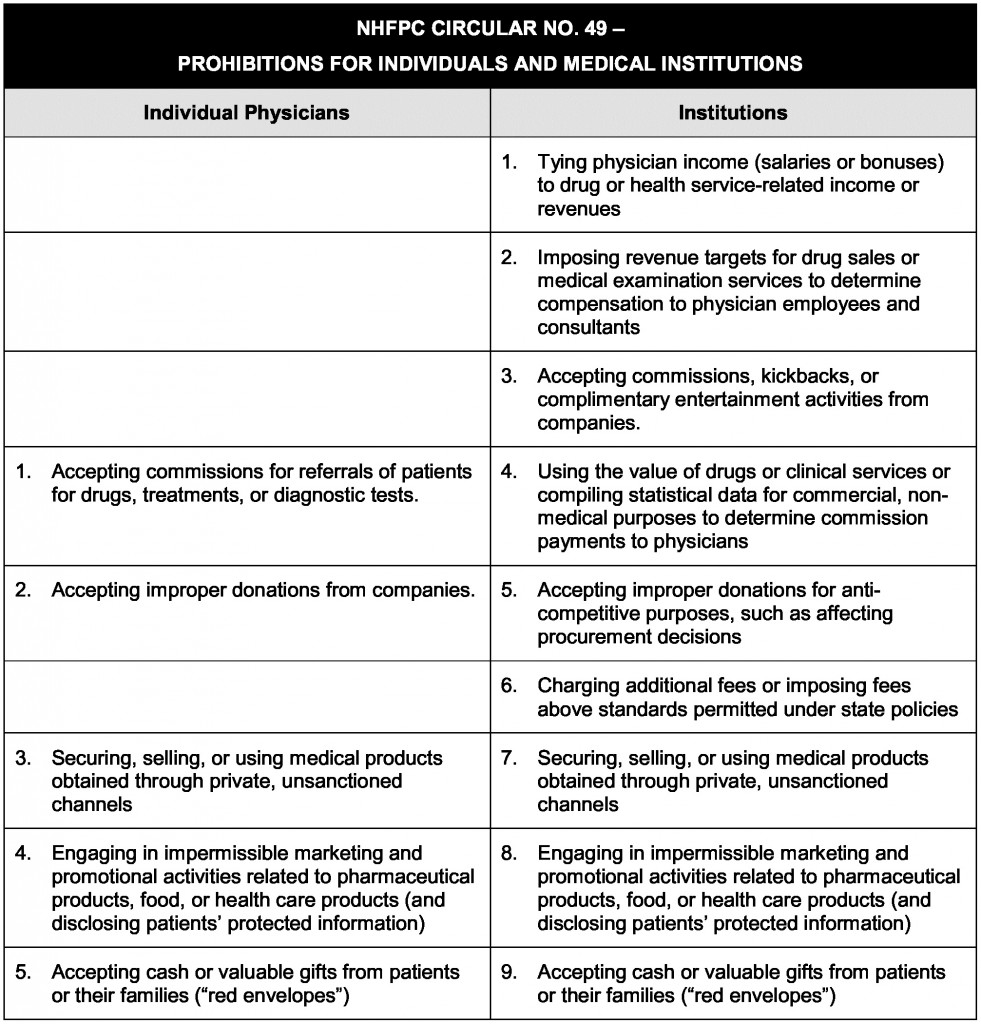 A violation of the “Nine Prohibitions” may result in a variety of disciplinary actions, from a simple warning to the suspension or cancellation of a physician’s license.

China’s anti-corruption enforcement efforts have been steadily ramping up since June 2010, when the Chinese Ministry of Health (MOH) launched its own nationwide campaign against pharmaceutical industry corruption and established its own “blacklist” of companies accused of paying commercial bribes in connection with the purchase and sale of pharmaceutical products. These efforts escalated dramatically in summer 2013, as evidenced by reports about high-level managers detained in various cities as part of an investigation into potential “economic crimes,” and the Chinese State Food and Drug Administration’s six-month crackdown on misconduct in its drug market.  As we have previously reported, GlaxoSmithKline has already implemented compliance policy changes to its sales and marketing practices, likely as a response to China’s strengthened enforcement posture against bribery and corruption in the health care industry.

In reality, if a pharmaceutical or medical device company doing business in China has robust U.S. Foreign Corrupt Practices Act or U.K. Bribery Act compliance policies in place, the prohibited activities under Circular Nos. 49 and 50 should already be covered.  Nevertheless, the crippling threat of being blacklisted should prompt such companies to reevaluate and, if necessary, revise their compliance policies, and to ensure that the proper “tone at the top” is conveyed globally.