Following months of speculation, on January 23, 2018, the Trump Administration issued a Proclamation announcing new tariffs on imported solar cells and modules (the “Solar Tariff”) in response to the Section 201 petition brought by Suniva and SolarWorld Americas. The four-year Solar Tariff becomes effective on February 7, 2018, and will start at 30% in Year 1 and ramp down by 5% annually. The Solar Tariff exempts the first 2.5 GW of solar cells (not modules) imported each year. Although a tariff of any kind will impact some number of economically marginal projects, it is less clear how significantly the Solar Tariff will impact the U.S. solar market as a whole and whether those impacts will be felt equally across industry segments.

How Did We Get Here?

The Solar Tariff is the outcome of a petition brought by Suniva (later joined by SolarWorld) before the U.S. International Trade Commission (the “ITC”) in April 2017, alleging that Asian companies unfairly drove the price of solar cells and modules to unsustainably low levels, which caused serious injury to the domestic solar manufacturing industry. Suniva and SolarWorld requested tariffs of 24 cents/watt on solar cells and 32 cents/watt on modules. For reference, the National Renewable Energy Laboratory (“NREL”) benchmarks solar modules at 35 cents/watt during Q1 2017 (GTM Research reports 38 cents/watt for the same period), so the requested tariff level would have been over 90% of the cost of the products. None of the ITC Commissioners recommended a remedy at that level, but the range of outcomes was broad (see summary table below).

What Did the President Decide?

Under Section 201 of the Trade Act of 1974 (the statute under which Suniva brought its petition), the President has authority to accept, reject or modify the ITC Commissioners’ recommendations. Here, the White House appears to have adopted the “middle road” recommendations jointly made by Commissioners Williamson and Johnson: 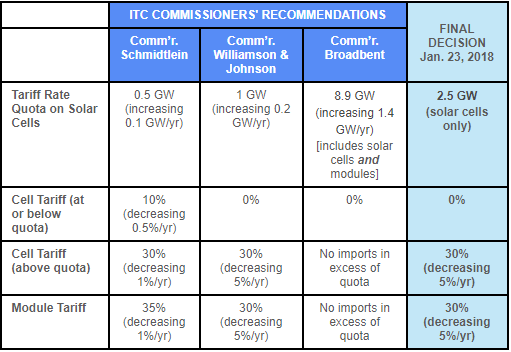 Is This Going to Kill the Solar Industry?

No, but some projects will feel the impact more than others. It will take some time for the industry to parse the impacts of the Solar Tariff, but let’s first put this into context. NREL reports that solar modules account for 19% (for commercial solar) to 33% (for utility-scale solar) of the installed cost of a solar PV system. So the Solar Tariff represents an increase of 6% to 11% of total installed system cost. In real dollars, the 30% Solar Tariff will immediately add between 10.5 cents/watt and 11.4 cents/watt to module costs (assuming module prices otherwise stay at Q1 2017 levels). By comparison, NREL reports that the installed cost of commercial solar fell 32 cents/watt between Q1 2016 and Q1 2017, and over 40 cents/watt for utility-scale solar during that same period.

Those numbers don’t tell the whole story, however, and that story may be different for utility-scale and commercial-scale solar projects. A big portion of falling costs reflects falling module prices, and regaining that ground will put downward pressure on soft costs in order to maintain margins in an environment of low power prices. That pressure may be most acute for utility-scale projects, where economies of scale have already compressed soft costs to very low levels, and low wholesale power pricing leaves little room to pass through increased project costs to offtakers. By comparison, commercial-scale projects have more room for innovative solutions to decrease soft costs, and because output pricing is generally tied to retail power costs, there may be more flexibility to spread the Solar Tariff among contractors, owners and offtakers. 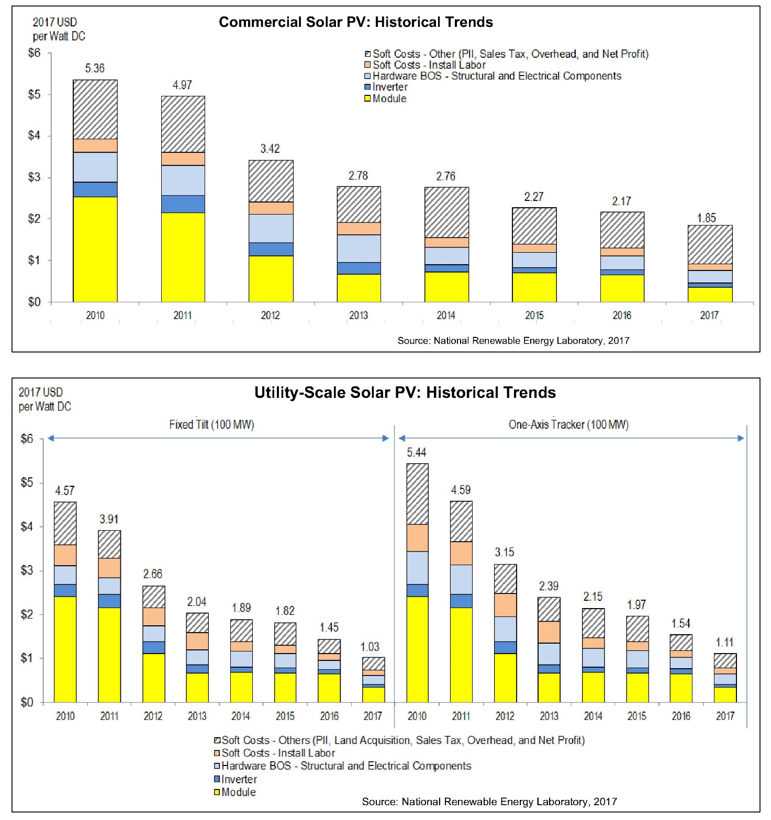 We also note that the real impact of the Solar Tariff may be blunted by steps already taken by developers, contractors and investors in the second half of 2017. Many developers went on a solar module buying spree in anticipation of a Solar Tariff. Investors, too, have been carefully watching the Section 201 proceeding, and at least some deals, especially those inked after the ITC released its recommendations in October, have included risk allocation terms in the event a tariff was imposed affecting the project.

It is generally expected that one or more sovereign governments will appeal this matter to the World Trade Organization (“WTO”). Several Asian countries have been closely following the Section 201 proceeding, including China, Malaysia and Korea, each of which exports a substantial portion of the world’s solar cells and modules. However, a WTO appeal could take a long time to resolve, and a pending WTO appeal likely would not stay the implementation of the Solar Tariff.