Although the Consumer Product Safety Improvement Act of 2008 (CPSIA) authorized a budget of $136.4 million for CPSC in fiscal year 2014, Congress set the CPSC's authorization levels years before the recent budget climate took hold in Washington DC. In its 2014 budget request, the agency requested $117 million from Congress to fund its operations and 548 employees. In the budget deal passed last week, the CPSC received the full $117 million and an additional $1 million for a congressionally mandated pool safety grant program.

Another significant aspect of the CPSC’s budget is what’s not included:

There are no significant policy riders pertaining to CPSC attached to the final bill. The only additional provision is an amendment to the statutory language for the pool safety grant program.

For the past several years, the Senate and House have attempted to include policy riders ranging from defunding the CPSC’s saferproducts.gov public database to mandating the creation of federal safety standards for button batteries and window coverings. An earlier version of the House budget bill appropriated the CPSC $114 million and included a provision requiring the U.S. Government Accountability Office (GAO) to conduct a cost-benefit analysis of the CPSIA. While a few policy riders made in into the final version of the budget deal (like one cutting funding for enforcement of the Department of Energy's ban on certain incandescent light bulbs), the rider mandating a cost-benefit analysis of the CPSIA did not survive the congressional negotiation process.

Since the “year of the recall” in 2007 and the passage of the CPSIA in 2008, it seems that Congress will keep the CPSC consistently funded at a level that is nearly double its prior funding levels (see below). Although CPSC’s funding has significantly increased, it's important to keep that increase in perspective. CPSC's $118 million budget is still less than a fraction of agencies like the Environmental Protection Agency (EPA) and the Food and Drug Administration (FDA), which have 2014 budgets of $8.2 billion and $4.35 billion respectively. 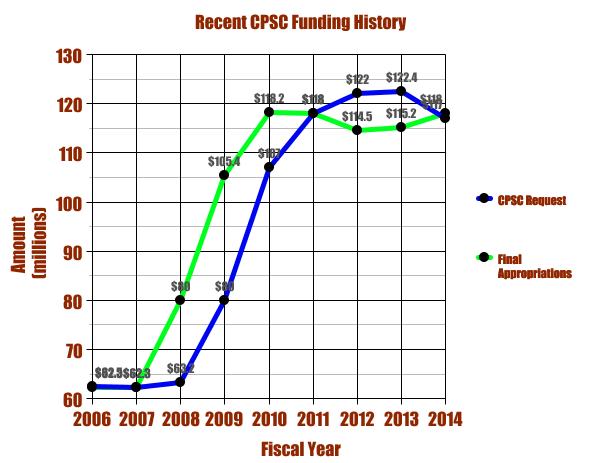