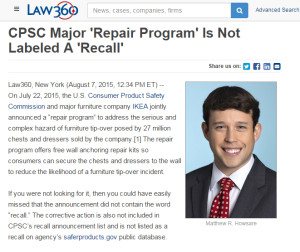 [This article originally appeared on Law360 on August 7, 2015 and updates our prior post on this CPSC corrective action]

On July 22, 2015, the U.S. Consumer Product Safety Commission and major furniture company IKEA jointly announced a “repair program” to address the serious and complex hazard of furniture tip-over posed by 27 million chests and dressers sold by the company. The repair program offers free wall anchoring repair kits so consumers can secure the chests and dressers to the wall to reduce the likelihood of a furniture tip-over incident.

If you were not looking for it, then you could have easily missed that the announcement did not contain the word “recall.” The corrective action is also not included in CPSC’s recall announcement list and is not listed as a recall on agency’s saferproducts.gov public database.

The fact that many people did not catch that the corrective action was not called a "recall" goes to the core of an argument made by the regulated community over the past few years: not every voluntary corrective action must or should be called a “recall.” For example, there may be important safety actions and programs undertaken by a company that may not be strictly required under the law, but nonetheless are in the public interest. Even legally required actions are often not strictly a “recall” but rather are another form of corrective action — such as a repair or a warning.

The uniform nature of the CPSC’s policy is demonstrated by the fact that the last corrective action the CPSC agreed to not label as a recall occurred in March 2009. Since that time, the agency has announced several recalls where the corrective action was not a traditional “recall” of a product. Consumer remedies for these types of recalls have included obtaining a caution label instructing consumers to wear protective gloves when removing a product, receiving revised instructions not to over inflate an exercise ball and performing an inspection to check for mold, among others.

In explaining the rationale behind the proposal to formalize this practice in the pending controversial “voluntary recalls” rule-making, the agency stated:

In response, the National Association of Manufacturers (NAM) argued that the uniform use of the word recall may contribute to “recall fatigue” among consumers. In comments to the agency, NAM argued:

Calling a corrective action plan a ‘recall’ when the action needed to address a potential hazard is far more limited than a refund or replacement could mislead consumers. Calling each and every corrective action a ‘recall’ also adds to growing concern that consumers are experiencing ‘recall fatigue’ as a result of the increasing number of recalls. As a result of recall overload, getting the attention of consumers when a notice involves a significant risk of harm contrasted with a minor technical issue or action out of an abundance of caution based on unverified information is becoming increasingly difficult. Rather than address these types of legitimate concerns, the proposed rule will contribute to this recall fatigue.”

Unfortunately, it is not known how much additional media and consumer attention corrective actions receive when they are labeled a “recall” instead of something else. Similarly, it is not known whether calling all types of corrective actions “recalls” is contributing to consumer “recall fatigue” as groups like NAM have argued and USA Today and the Washington Post have written about previously.

Given the continued admonition from the CPSC and consumer advocacy groups to the regulated community that corrective actions remain generally ineffective and more needs to be done, however, it is fair to say that labeling every corrective action a recall over the past six years has not turned out to be a game changer in terms of making them more effective.

The Effect of Using “Repair Program” Instead of “Recall”

After CPSC’s announcement of the IKEA repair program, the Today Show, the New York Times, the Washington Post, USA Today, ABC News, the Associated Press, CNN and nearly 700 other local, regional, national and international media outlets carried some version of the announcement alerting consumers to the repair program. Although some news organizations incorrectly labeled the corrective action a recall — and it cannot be known at this time how many consumers will obtain free repair kits in response to the announcement — it is fair to say that the message does not appear to have been diluted based on the fact that the corrective action was called a “repair program” rather than a “recall.”

It remains to be seen how and if the CPSC will soften its policy regarding the labeling of corrective actions of this nature or whether this repair program, the first of its kind in six years, is a not-to-be-repeated exception for reasons only the CPSC and the company will ever know. Indeed, CPSC Chairman Elliot Kaye has already indicated that this was a “one-off” and is not a sign of a policy change moving forward. At the very least though, this example does show there are at least some rare situations in which the CPSC may accept a corrective action that is not labeled a recall.