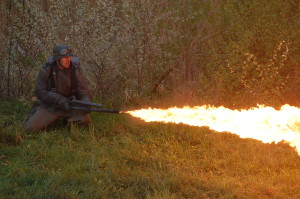 Yes. You read that correctly. Two US companies are selling personal flamethrowers to the public. Once grisly weapons of war, the flamethrowers are now being marketed for more practical purposes such as clearing brush and snow, incinerating weeds between cracks on the driveway, controlled burns, insect control and, of course, having fun.

One of the flamethrowers sprays flames up to 50 feet and uses a hose connected to a backpack that holds a tank containing a mixture of diesel and gasoline fuel. You can also buy napalm mix to make the flames shoot even farther. The second flamethrower has a fuel can mounted on the device to make it handheld and sprays flames up to and beyond 25 feet.

So are these flamethrowers legal? Are they federally regulated?

These are some of the same questions explored in recent news stories covering these devices. A recent CNN story cited a spokesperson for the Bureau of Alcohol, Tobacco, Firearms, and Explosives (ATF) as saying the ATF does not regulate flamethrowers because they are not firearms. It also appears that possession of the devices (but not their manufacture or sale) is illegal in Maryland and also in California without a license.

The mayor of Warren, MI also recently proposed a ban on storage, use, and possession of flamethrowers, stating that the devices are "so potentially dangerous that it's just unacceptable." The CEO for one of the flamethrower companies responded to the proposed ban, saying "simply owning a particular product should not be a punishable offense. It's a matter of education and respect for safety."

At least one of the company websites states the flamethrowers are “federally unregulated.” Just because they are not regulated (i.e., addressed specifically by a law or regulation), however, does not mean that they don’t fall under the jurisdiction of a federal agency. If the ATF does not consider these devices to fall under its jurisdiction because they are not a firearm or an explosive then that would really only leave one other federal agency as a likely candidate: the CPSC.

As our readers know, the CPSC is charged with regulating the safety of consumer products from fire, electrical, chemical, and mechanical hazards. So is a personal flamethrower a consumer product under the jurisdiction of the CPSC? Although this is a new type of consumer product, it certainly would fall within one of the agency’s areas of expertise.

Additionally, the CPSC’s jurisdiction over consumer products is broad. To paraphrase the statutory definition, consumer products under the jurisdiction of the CPSC include any article for sale to a consumer for use in or around a residence, school, in recreation, or otherwise. The broad nature of this definition is primarily limited by specific exclusions for product categories regulated by other federal agencies, including products such as automobiles, tires, boats, alcohol, tobacco, firearms, food, drugs, cosmetics, pesticides, and medical devices among others.  We explored the CPSC’s jurisdiction (as well as that of other agencies) recently in a separate post.

Here, given the marketed use of these products for household purposes, such as clearing brush and snow, and the ATF’s initial position that these products are not regulated by ATF, it appears that personal flamethrowers may be one more product to add to the 15,000 kinds of consumer products under the CPSC’s jurisdiction. While we cannot be certain which federal agency has jurisdiction over personal flame throwers, the recent press attention raising questions over their regulation at the federal level may have already sparked some conversation among federal regulators, including the CPSC, about that very question.