The America Invents Act (AIA) gives the Board broad discretion in deciding whether or not to institute an IPR or CBM when the Petition addresses substantially the same prior art or arguments to those previously considered by the PTO.  This issue of “redundancy” often arises in the situation where the Petitioner has previously brought an IPR or CBM against the same patent and is seeking to file a second Petition.  The statute provides that the Board, in determining whether to institute an IPR or CBM, “may take into account whether, and reject the petition or request because, the same or substantially the same prior art or arguments previously were presented to the Office.” 35 U.S.C. § 325(d).  A survey of the Board decisions to date demonstrates that different Board panels have exercised this discretion differently. The Board has yet to issue a precedential opinion on this issue. 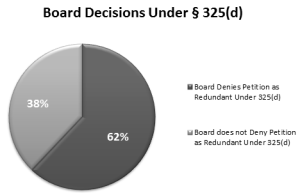 Chart: The chart (above) displays the frequency with which the Board refused to institute an IPR or CBM trial due to redundancy under §325(d).  The data used to compile this chart considered only those cases addressing multiple IPR and/or CBM Petitions.  It excludes decisions where the Board considered the issue in the context of prior art from the original or reexamination prosecution.

The Board has considered redundancy under § 325(d) in the context of multiple IPR/CBM petitions on approximately 40 occasions, and denied the subsequent petition approximately 62% of the time, often criticizing Petitioner’s subsequent petition as a “second bite at the apple.” See e.g., Medtronic Vascular, Inc. v. Endotach LLC, Case IPR2014-00695 (PTAB Sept. 25, 2014) (denying Petitioner’s second petition as an inappropriate “second bite at the apple” where Petitioner failed to present “argument or evidence to explain why the grounds of unpatentability asserted in the [second] Petition could not have been asserted in the [first Petition]”).

When denying a subsequent petition under §325(d), the Board frequently faults the Petitioner for failing to explain why the subsequent petition should be instituted over “the same or substantially the same prior art or arguments” that were presented in previous petitions. See Medtronic, Inc. v. Nuvasive, Inc., IPR2014-00487 (PTAB Sept. 11, 2014) (denying Petitioner’s third petition as “essentially a duplicate of the previously denied petitions” where Petitioner failed to provide any reasoning as to why the third petition should be instituted over similar prior art or arguments contained in prior petitions); Biodelivery Sciences Int’l. v. RB Pharma. Ltd., IPR2014-00998 (PTAB Dec. 19, 2014) (denying Petitioner’s second petition that merely “recycled previous art and arguments”).

The Board’s decisions to institute (or not institute) subsequent petitions filed to correct errors in previous petitions are somewhat inconsistent.  For example, in Butamax Advanced Biofuels, Inc. v. Gevo, Inc., IPR2014-00581 (PTAB Oct. 14, 2014), the Board denied Petitioner’s second IPR petition, which sought to correct an error identified by the Board in the earlier petition. The Board partially instituted the first petition while rejecting parts of the petition for failing to properly establish an asserted reference as prior art.  Petitioner Butamax attempted to correct the flaw by filing a second petition for IPR with new evidence and arguments on that exact issue.  The PTAB, in rejecting the second petition under § 325(d), faulted Butamax for putting forth substantially the same prior art presented in the first petition.  The PTAB noted that allowing Butamax to correct the deficiencies in its first petition with a second petition would impermissibly give Butamax a “second bite at the apple.”

Contrarily, in International Business Machines Corp (“IBM) v. Intellectual Ventures II LLC, IPR2014-01410 (PTAB Dec. 8, 2014) (the “1410 IPR”) the Board allowed Petitioner’s second petition, under what appear to be similar facts.  The Board instituted IBM’s first petition in IPR2014-00660 (the “660 IPR”) on all asserted claims.  The Board denied IBM leave in the 660 IPR to file a corrected petition fixing its omission of a claim limitation from one of its claim charts.  Therefore, the 660 IPR remained instituted on the flawed Petition.  IBM filed a second petition, in the 1410 IPR, specifically correcting the error in its 660 petition.  Patent Owner argued that the 1410 IPR petition should not be granted and consolidated with the 660 IPR under § 325(d). The Board, without addressing Patent Owner’s § 325(d) argument, granted the 1410 IPR petition and consolidated it with the 660 IPR.  The Board gave IBM a “second bite at the apple” to correct a mistake in its first petition.

The Board’s apparently inconsistent decisions under § 325(d) leave Petitioners and Patent Owners with limited guidance on whether the Board will deny subsequent petitions under § 325(d), and this will likely remain the case until the Board adopts a consistent application of § 325(d) or issues a precedential opinion.  The best practice for Petitioners is therefore to ensure their original petitions are free from all flaws that might threaten institution.  In the event that a second petition becomes necessary, Petitioners should specifically explain how the grounds and prior art in the subsequent petition differ from all grounds and prior art previously asserted before the USPTO.