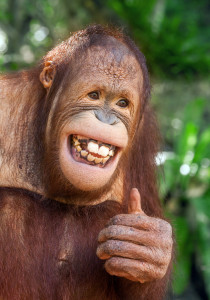 We are back with our annual Super Bowl prediction post.  As noted in prior years, people are increasingly making their predictions based on two indicators: unemployment rates and the whims of Utah zoo animals.  They each have pretty good track records.  An orangutan predicted seven straight Super Bowls correctly and the city with the lower unemployment rate has won 21 of the last 27 Super Bowls.

Last year, the lovable Elijah the orangutan passed away and the prediction torch was passed to Vulcan the Lion, a fellow resident at Utah’s Hogle Zoo.  Vulcan kept the animal streak alive by correctly picking the Patriots, who squeaked by the Seahawks with an improbable game-saving play.  But Foxborough’s unemployment rate was slightly higher than Seattle’s rate, which meant one in the loss column for unemployment statistics.

This year, Vulcan handed the reigns back to the primates as Elijah’s 15-month old son Tuah made the pick.  In just about the cutest way possible, he went with the Carolina Panthers.  But, like last year, the unemployment statistics went the other way - pointing to the Denver Broncos - Denver has a 3.1% unemployment rate as compared to the 4.9% rate in Charlotte.

So who ya got?  I’m with Tuah (sorry Peyton).  (And if this doesn't do it for you, here are some other great ways to predict the Super Bowl, including based on chicken wing consumption.)

Finally, as we do each year, here are some Super Bowl-related reminders for employers: