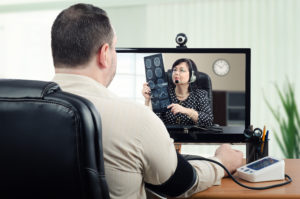 In 2016 and now in early 2017, state legislatures and regulatory boards continue to enact laws and rules setting telemedicine practice standards. Such standards generally include clarifying the definition of telemedicine as well as providing standards related to prescribing in an online setting, patient informed consent, treatment of medical records generated during a telemedicine encounter, and confidentiality. A recent survey conducted by the Federation of State Medical Boards (FSMB) found that telemedicine standards are the number one priority for state medical boards going into 2017.

Nowhere has the struggle between state lawmakers and boards of medicine on telemedicine standards been more evident than in Texas. Earlier this month, Texas lawmakers introduced a bill (S.B. 1107) that would enable clinicians in the state to use telemedicine to establish a physician-patient relationship. The bill specifically eliminates the requirement that physicians conduct a face-to-face meeting with a patient before using telemedicine for certain services, such as issuing a prescription.  The bill would allow physicians to establish a relationship with a new patient through a virtual visit involving an audio-video telecommunications platform or through a combination of store-and-forward technology and a phone call if the physician has had prior access to the patient’s medical records. The proposed legislation is in response to the 2015 Texas Medical Board emergency proposed rule. Under the proposed rule, physicians must perform a face-to-face or in-person physical examination of a patient prior to issuing a prescription or risk sanctions for unprofessional conduct. The proposed rule drew sharp criticism from telemedicine providers and, since April 2015, the Medical Board has been embroiled in a lawsuit with Teladoc, a Dallas-based telehealth provider that does a majority of its business via phone. Both sides have asked for and received a stay in the litigation until April in hopes that new legislation will solve the dispute.

The fact that state legislatures and regulatory boards are issuing detailed telemedicine standards is good news for the telemedicine industry. Detailed standards decrease the uncertainty of state laws in this area and pave the way for providers to tailor their telemedicine programs to fit within state laws. As providers and consumers continue to use technology to provide and receive health care, state lawmakers will almost certainly continue to adopt and amend state laws with an eye towards decreasing telemedicine barriers.