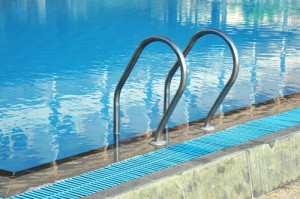 In the wake of the tragic drowning of Virginia Graeme Baker, the granddaughter of former Secretary of State James Baker, Congress passed and President Bush signed into law the Virginia Graeme Baker Pool and Spa Safety Act. The legislation was sponsored by Congresswoman Debbie Wasserman Schultz (D-FL) and it mandates safety requirements for pool drainage systems in all “public pools and spas.” The safety requirements are intended to prevent swimmers from being entrapped underwater by the powerful suction forces of pool drains – a relatively rare but serious hazard that led to the deaths and injuries of several children.

The law is enforced by the U.S. Consumer Product Safety Commission (CPSC) and has two primary requirements: the installation of drain covers that comply with the CPSC drain safety standard in all public pools and spas, and, for many public pools and spas, the installation of a “backup system” designed to automatically shut off drainage systems should a drain entrapment occur. The expense associated with installing these types of devices is not insignificant and the failure to comply with these federal or similar state requirements could lead to lawsuits, civil penalties, and potentially even criminal prosecution.

While one controversial (but decided) implementation issue centered on the agency’s reversal of an “unblockable drains” exemption from the backup system requirement, another more important issue to the proprietors of small bed and breakfast properties and people who occasionally rent out their homes still remains unresolved—do they have to comply with the VGB Pool and Spa Safety Act?

What is a Public Pool or Spa?

The statute defines “public pool and spa” to include a swimming pool or spa that is accessible to:

While most of the statutory definition is relatively straightforward, one area left open for interpretation by the CPSC is “public accommodations facility” and what types of properties this term includes.

What is a Public Accommodations Facility?

“An inn, hotel, motel, or other place of lodging, except for an establishment located within a building that contains not more than five rooms for rent or hire and that is actually occupied by the proprietor of such establishment as the residence of such proprietor.” (March 15, 2010).

“An inn, hotel, motel, or other place of lodging, including, but not limited to, rental units rented on a bi-weekly or weekly basis.” (October 22, 2010).

The first definition proposed by the CPSC exempted “other places of lodging” used as the owner’s residence with five or fewer rooms available for rent. The exemption was modeled after other laws regulating businesses that house transient guests, such as the Americans with Disabilities Act. A small number of critics of the agency’s first interpretation, including four members of Congress, weighed in soon after the Commission proposed it and argued the number of units available for rent has no relationship to whether a pool or spa may be hazardous.

Shortly thereafter, the Commission rejected the CPSC staff recommendation to move forward and finalize the original definition. Instead, the Commission proposed a second, broader definition with the express intent of including owner-occupied bed and breakfast properties and other short-term rental properties with five or fewer rooms available for rent. The expansion was controversial at the time and the Commissioners in favor of the change stated the decision was based on both statutory interpretation and the rationale that the same pool drain safety concerns apply regardless of how many rooms a public accommodation has available for rent (the Commissioners statements are available here).

The Advent of Online Condominium, Home, and Room Rentals

Subsequent to the issuance of the agency’s second proposed rule, multiple websites like Airbnb.com, VRBO.com, Roomorama.com, and Couchsurfing.org, have gained popularity by allowing any individual property owner to act as a “host” and rent out their home, condominium, or individual bedrooms within their residence to others. The advent of these websites and the tens of thousands of people who now use them for rental income adds a new dimension to the debate of what constitutes a “public accommodation.”

Under the most recent definition proposed by the Commission, the requirements of the VGB Pool and Spa Safety Act likely would apply to a significant number of homeowners who use services like Airbnb and have a pool, spa, or hot tub available for use by renters. Under the CPSC’s original definition, many of these same homeowners likely would be exempt from the law.

Are Short-Term Rentals Subject to the Pool and Spa Safety Act?

Despite the controversy surrounding this issue, the Commission has taken no further action to finalize the rule since the second comment period closed in December 2010. The rulemaking is not included in the CPSC’s current regulatory agenda and there does not appear to be a plan to bring the issue to resolution. With safety interests on one side, the expenses associated with installing new safety devices on the other, and the range of potential consequences for noncompliance hanging in the balance, it is somewhat surprising that the question of which interpretation the Commission intends for the CPSC staff to enforce has not yet been clarified.

There is no doubt that the 2010 decision indicates short-term rental properties with a pool, spa, or hot tub must comply with the requirements of the VGB Pool and Spa Safety Act. This likely would come as a surprise for small bed and breakfast proprietors and homeowners using online services to rent out their homes (or rooms in their homes) who offer a pool, spa, or hot tub for use by renters.

The interpretive rulemaking notifying stakeholders that the agency interprets the statute to apply to these types of rental properties has not been completed though. This means the homeowners who commented on the 2010 expansion along with a rapidly expanding class of "online hosts” cannot be certain whether they are under a legal obligation to install compliant drain covers and backup devices. The concern created by the lack of certainty is compounded by the fact that the regulation is an interpretive rule, meaning the agency does not necessarily need to complete the rulemaking prior to enforcing the expanded interpretation of the law's application.

One recent development that may impact this situation is the significant change in the composition of the Commission. Only one Commissioner that voted to overturn the recommendation of the CPSC staff and expand the law’s coverage is still serving on the Commission. Because the previous Commission’s interpretation of the statute was never finalized and there are now three new Commissioners and a new Chairman, the question of whether the law applies to small bed and breakfast proprietors and "hosts" utilizing online rental services is considerably more uncertain now than it was a few years ago.