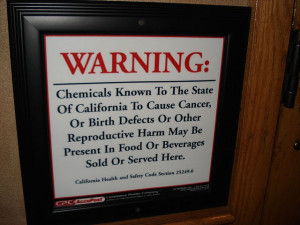 This space has addressed on several occasions, [HERE, HERE, HERE, and HERE], recent attempts to modify California’s Safe Drinking Water and Toxic Enforcement Act of 1986, commonly known as Proposition 65. Many of the comments on proposed changes to Proposition 65 have panned the proposed changes because they either do too little or make businesses’ lives more difficult.

Legislation introduced last week (AB543) by Rep. Bill Quirk (D-Hayward) proposes some sane changes to Proposition 65. Representative Quirk holds a PhD in Astrophysics and was a scientist at Lawrence Livermore National Laboratory before election to public office. It appears that Dr. Quirk understands both the issues of Proposition 65 and politics. Rather than taking a meat axe to the proposition (which more than likely will have no chance in the California Legislature), the legislation focuses on the scientific evidence needed before an exposure warning is mandated under Proposition 65.

Proposition 65 prohibits any business from knowingly and intentionally exposing any individual to a chemical known to California to cause Cancer or reproductive toxicity without giving a specified warning.

The proposed bill would provide that a business does not knowingly and intentionally expose an individual to a chemical known to California to cause Cancer or reproductive toxicity if there exists an exposure assessment that meets three specified requirements:

The proposed bill defines a qualified scientist as someone who has completed a Masters, Doctoral, or Medical Doctor degree and has experience in certain enumerated scientific fields. Epidemiology, Oncology, Public Health, Toxicology, Reproductive Toxicology, Teratology, and Environmental Chemistry are some accepted areas of expertise.

Why Is Such an Amendment to the Bill Required?

Proposition 65 prohibits companies from knowingly and intentionally exposing individuals to a chemical listed by California to cause Cancer or reproductive toxicity without first giving a clear and reasonable warning. Proposition 65 regulations, themselves, define “knowingly” as knowledge of an exposure to a listed chemical as occurring, not knowledge that the exposure is unlawful, and the regulations explain that exposure “through a misfortune or accident and without equal design, intention or negligence” is not a violation.

One (but apparently not one who is a Prop 65 plaintiff) could reasonably assume that no liability under Proposition 65 exists for a company unaware that its products or premises pose a potential for exposure to a listed chemical. In California, however, such an assumption will be misplaced. Many plaintiffs take the position that a company is on notice based on the materials used in the products or on premises, and even if there were no prior knowledge, that company is on notice once it receives the plaintiff’s 60-day notice of the alleged violation. The company must provide warnings or agree to a reformulation, in addition to providing settlement payments and paying attorneys' fees.

In situations where a company has a scientific analysis showing that the potential exposures are below various safe harbor levels, certain plaintiffs refuse to accept the results and demand reformulation or implementation of warnings along with settlement payments and attorneys' fees. Some companies have successfully litigated the issues but many, if not most companies, opt to avoid the time and expense of litigation when Proposition 65 claims can be settled through a business decision to reformulate or place warnings where appropriate as well as agreeing to pay in order to reach a settlement without a costly trial.

Is the Current Situation Under Proposition 65 Good Public Policy?

As Prop 65 has currently evolved, plaintiffs make claims and demand settlements despite the scientific evidence showing that neither a reformulation nor a Proposition 65 warning is required. Furthermore, businesses incur substantial expenses for unnecessary reformulation and warnings and the public is subject to over-warning which has been recognized by psychologists, human factor experts, and even the California Supreme Court as being misleading and could potentially dissuade consumers from using beneficial products.

Chances of Success for the Bill

Though not a panacea to eliminate Proposition 65 claims, the bill does provide a sane tweak to the evidentiary requirements before warnings or reformulations are required. Thus far, more than 80 Chambers of Commerce and Trade Associations have gone on record expressing their support for AB543. Proposition 65 provides that it can be amended by a statute, but such amendment must be passed by a 2/3 vote of both the California Assembly and California Senate. It will be interesting to see who lines up as an opponent to this proposal. A requirement of scientific evidence should not be viewed as an onerous burden if there were no affront to the safety of the consuming public.

We will follow the progress of this AB543 and report whether sane tweaks to consumer protection statutes can survive in California.