Today, President Donald Trump officially announced his intent to nominate Acting Chairman Ann Marie Buerkle to be the permanent Chairman of the U.S. Consumer Product Safety Commission. Her new seven year term will begin on October 27, 2018 when her first term is set to expire. If confirmed, she will become the permanent Chairman immediately and her new term will end in October 2025.

The official announcement is copied below and was released by the White House Office of the Press Secretary just a few hours ago. 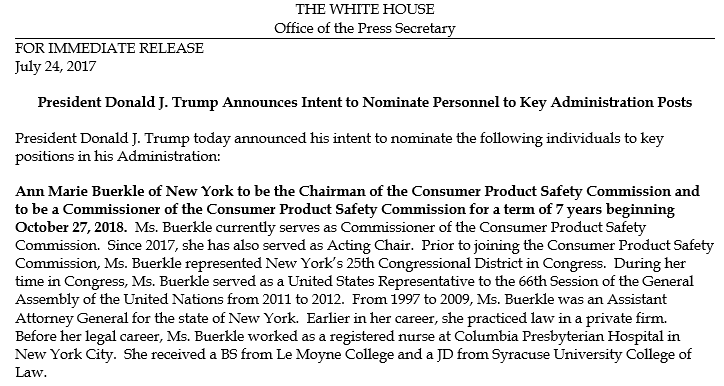 “Chairman Buerkle’s name has been circulating for some time now as a potential candidate for the permanent Chairman of the CPSC given her extensive experience inside the agency (and as a member of Congress) as well as the significant amount of proactive outreach she has done with agency stakeholders during her term as a Commissioner. Given the fact that a new Chairman from outside of the current Commission could not join the agency until late October at the earliest, it has also been pointed out that President Trump’s nomination of Buerkle as the permanent Chairman will allow for earlier hiring for key staff positions and the advancement and framing of her priorities as the Republican Chairman that can then be more quickly implemented once a third Republican Commissioner joins the agency.”

All of us at Mintz Levin congratulate Chairman Buerkle and wish her a speedy confirmation.