Today, President Trump announced his nomination of Dana Baiocco to be a Republican Commissioner on the Consumer Product Safety Commission. If confirmed, Ms. Baiocco would take the seat of Commissioner Robinson, whose term expires on October 26, 2017.

Baiocco is a well-known litigator and partner at Jones Day in Boston, Massachusetts. She is also familiar with the world of product safety. Baiocco’s product safety experience includes extensive product-liability litigation, having defended many major consumer product companies. Ms. Baiocco’s biography can be found here.

The nomination is surely a welcome one for Acting Chairman Ann Marie Buerkle, who is currently operating with a Democratic majority and, until today, uncertainty surrounding when that would change. The nomination signals the White House’s intent to achieve a Republican majority at the CPSC and curtail the agency’s steady push of Democratic initiatives along 3-2 party line votes.

Notably, the nomination comes at the same time the Senate Committee on Commerce, Science, and Transportation announced that it will hold a confirmation hearing on September 27, 2017 for Acting Chairman Buerkle to become the permanent Chairman of the CPSC. If both Buerkle and Baiocco are confirmed, the agency would reflect the composition of the current executive and legislative landscape, with a Republican Chairman and a Republican majority of Commissioners.

Below is more information from the White House Press Release: 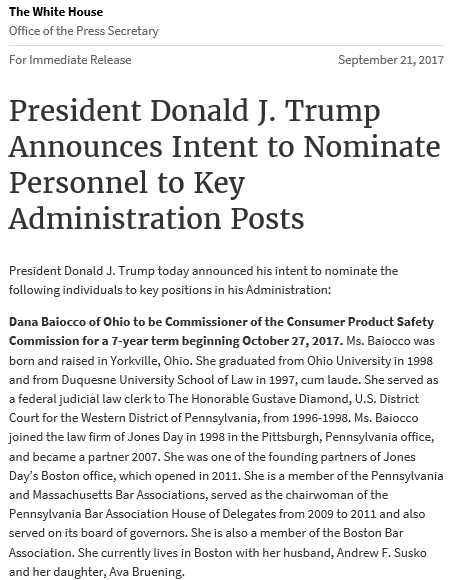