In an earlier post we provided advice on how to interpret the words “may” and “must” when they appear in arbitration clauses that are to be interpreted under U.S. law. Among other things, we explained that an arbitration clause that says that a party “may” submit a dispute to binding arbitration will be viewed as mandatory in U.S. courts if any party chooses to arbitrate.

That post led us to question whether those “may” and “must” words are interpreted consistently in other English-speaking common law countries. In typical litigator fashion, and for the reasons set forth below, we conclude that it depends.  The relevant laws of Canada, England, and Singapore are apparently consistent with that in the United States, while those of India and Australia are not.

The pertinent law in England and Wales is similar to that in the United States. Where an arbitration provision provides that a dispute “may” be resolved by arbitration, it means that it in fact “must” be resolved by arbitration if either party seeks to arbitrate.  The most important recent case concerning this issue is Anzen Limited and others v. Hermes One Limited [2016] UKPC 1 (“Anzen”).  There, the UK Privy Council considered three possible approaches to resolving the “may” vs. “shall” debate:

(Anzen ¶ 9.)  After examining relevant caselaw in several jurisdictions, the Privy Council concluded that Analysis IIGreat, thanks I was the correct one.  That is, where an arbitration clause provides that the parties “may” refer a dispute to arbitration, the filing of a stay application by one of the parties is all that is necessary to forestall litigation.  This approach, according to the Privy Council, “enables a party wishing for a dispute to be arbitrated either to commence arbitration itself, or to insist on arbitration, before or after the other party commences litigation, without itself actually having to commence arbitration if it does not wish to.” (Anzen ¶ 35.)

The Privy Council rejected Analysis II because, under that framework, the party who did not initiate the litigation – i.e., a defendant – “could only end the litigation by . . . commencing an arbitration.” (Anzen ¶ 32.) However, that party might not wish to initiate an arbitration because, considering that it was the defendant in the litigation, it may not have any claims to assert.  “All it may be able to seek in any such arbitration would be a declaration of no liability in respect of any claim made by the first party in the litigation.”  (Anzen ¶ 32.)  The Privy Council therefore decided that “[t]he better view of the words ‘any Party may submit the dispute to binding arbitration’ is therefore that they are not inextricably linked to the actual commencement of arbitration.” (Anzen ¶ 33.)

The Anzen holding is thus similar to those in most U.S. courts – if the agreement provides that the parties “may” arbitrate disputes, then litigation is a viable option only as long as no party “insist[s] on arbitration.”

The roots of the Anzen decision lay in Canadian jurisprudence, and so the view in Canada too is similar to that in the U.S.

The court came to a conclusion that was later adopted by the Privy Council in Anzen, holding that a “permissive” arbitration clause such as this enables the parties to litigate only if no party elects to arbitrate:

It appears to me that the plain meaning of section 11 of the contract is that either party to the contract may elect to have a matter in dispute that is covered by the contract referred to arbitration. In this case, since the respondents had initiated proceedings in the courts, the appellant was presented with a choice between electing binding arbitration or acquiescing in the respondents’ decision to resort to the courts.

Australian courts, on the other hand, interpret the word “may” in an arbitration clause to enable a party to resolve its dispute by arbitration or risk having no formal means of dispute resolution at all.

For example, in Pipeline Services WA Pty Ltd v. Australia Pty Ltd [2014] WASC 10 (“Pipeline”), the parties’ agreement included a multi-step dispute resolution clause, culminating in the provision that “either party may by notice to the other party refer the dispute to arbitration.”  (Pipeline ¶ 9.)  The Supreme Court of Western Australia interpreted “may” in that provision to mean that the parties may arbitrate but otherwise are not compelled to participate in any dispute resolution proceeding.  (See Pipeline ¶ 65.)  Therefore, if a party declines to arbitrate, litigation might not then be an option (presumably unless all parties agree).  “The clause . . . has the effect that if a party decides not to refer the dispute to arbitration it cannot thereafter commence legal proceedings relating to that dispute” and compel its adversary’s participation.

In sum, in Australia, “may” in an arbitration clause more or less means “arbitration or bust”.

The Supreme Court of India provided the following guidance:

Singapore’s law aligns with the prevailing view in the United States, Canada, England and Wales.

The lesson to be drawn is that a contracting party should seek legal advice regarding the law governing the interpretation of its arbitration clause in order to be able to determine whether “may” in that context effectively means “may,” “must,” or something else. 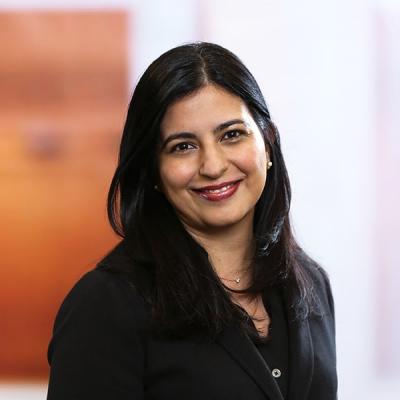 Narges Kakalia is Chief Diversity, Equity and Inclusion Officer at Mintz. She leads the law firm in developing its DEI strategy and implementing steps that foster a culture that celebrates differences and ensures that every employee has an equal opportunity to succeed.