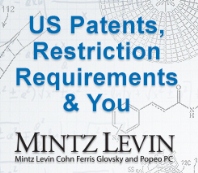 Awareness of restriction requirements best begins before an application is even filed – during preparation of the application’s initial claims.

Of course, you cannot fully predict when or if an Examiner will require restriction, but an applicant not being afraid to receive a restriction requirement can pay dividends down the road.

Also remember that jurisdictions outside the U.S. generally do not have the same restriction rules (often called “unity” rules overseas) as the U.S. If a U.S. application serves as the basis for a foreign application, claims that may not be examined in the U.S. for restriction reasons may be examined elsewhere. Thus, writing as robust and as complete an initial claim set as possible can help a foreign patent have expansive coverage even if the corresponding U.S. patent is more limited in scope because of restrictions issued during U.S. prosecution. Similarly, if a foreign application subject to more strict unity rules than the U.S.’s restriction rules serves as the basis for a U.S. application, consider whether the claims should be amended in the U.S. to take advantage of the more expansive examination possibilities in the U.S.