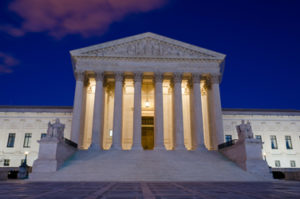 As we reported earlier here, the Federal Circuit Court of Appeals, in an en banc decision, agreed with Lexmark and confirmed two important aspects of the patent exhaustion doctrine, namely that (1) a patentee can “sell[] a patented article subject to a single-use/no-resale restriction that is lawful and clearly communicated to the purchaser” without exhausting the patentee’s rights to that item, thereby permitting enforcement of the restrictions via an infringement suit; and (2) because foreign sales do not permit “the buyer to import the article and sell and use it in the United States,” an authorized foreign sale of a product does not exhaust a patentee’s U.S. patent rights to exclude associated with that product.  The Supreme Court subsequently granted Impression Product’s petition to review these two holdings.

Along with the parties, Deputy Solicitor General Malcolm Stewart on behalf of the United States was heard at the oral argument.

At the oral argument, Impression Products argued for a bright-line rule: downstream restrictions do not fall within the purview of U.S. patent laws if the first sale was authorized by the patentee, reasoning that such a situation is best left for contract law.  Impression Products further argued that a rule to the contrary would expand the patent monopoly rights far beyond the bounds set by any Supreme Court precedent.  Justice Alito, however, expressed some doubt as to whether the Supreme Court should go against a 25-year-old Federal Circuit decision that has not previously been disturbed.  Impression Products also asked the Supreme Court to adopt the same rule for any foreign sales authorized by a U.S. patentee, arguing that a sale, regardless of where it is made, terminates all U.S. patent rights to that item.  Noting that no cases have said the patent exhaustion doctrine applies outside the U.S., Justice Alito expressed concern of setting forth such a rule where the Supreme Court has said that a statute does not apply outside the United States unless it expressly states the contrary.

For its part, the U.S. argued for reversal-in-part and vacatur-in-part of the en banc Federal Circuit decision.  Regarding the domestic exhaustion issue, like Impression Products, the U.S. argued that downstream restrictions should simply be left to contract law – not patent law.  With respect to the international exhaustion issue, the U.S. admittedly sought a middle ground between the two parties.  Specifically, a U.S. patentee who sells patented goods abroad should be able to reserve its U.S. patent rights, but must do so expressly.  According to the U.S., patent exhaustion is an all or nothing proposition:  a U.S. patentee can either consent to importation or not.  But if it consents to importation it cannot limit how the product is later used or resold.

Lexmark argued in support of the Federal Circuit’s ruling allowing patentees to restrict downstream use and sale of patented products, and noted that the Supreme Court has allowed similar restrictions on the use of sold products dating back to the 19th Century.  It further argued that downstream restrictions are pro-competitive insofar as they allow the patentee to exploit its property as efficiently and effectively as possible.  Such restrictions also assist in satisfying one of the goals of the Patent Act of broadly distributing new technology to increase consumer welfare.  Lexmark also argued that contract law is inadequate because (1) the parties are not always in privity, (2) it is often difficult to police such behavior, and (3) contract law lacks certain important remedies, such as injunctions.  Notably, Justice Breyer appeared skeptical that Lexmark would be able to get around all of the Supreme Court precedent on this issue.  As for the international issue, because U.S. patents have no force overseas, Lexmark argued that a foreign sale cannot invoke patent exhaustion for the simple reason that a foreign sale cannot lift any legal restraints that would otherwise be lifted with a U.S. sale.  Lexmark also argued that a patentee is not being properly compensated for its U.S. patent rights when it makes a foreign sale.  Justice Breyer expressed agreement with Lexmark on this point, yet Justice Sotomayor expressed her belief that a U.S. patentee is still being compensating for his or her idea regardless of whether it is under the U.S. patent or a foreign patent right.

After oral argument it is still unclear how the Supreme Court will rule in this case. One thing is clear, however:  the Supreme Court’s decision in this case has the potential to re-tool longstanding patent law doctrine.  Practitioners and patent owners will continue to anxiously await the Court’s resolution of this appeal.