The volume of health care–related qui tam litigation under the False Claims Act (FCA) remained robust in 2017.  Based on our review of the data in Mintz Levin's Health Care Qui Tam Database, we identified over 150 qui tam lawsuits that were unsealed in the twelve months ended November 30, 2017.  This post, which is the first in our Health Care Enforcement Review and 2018 Outlook series, discusses a number of interesting trends.

Government intervention remains the exception, not the rule.

Under the FCA, qui tam actions are filed under seal to permit the government to investigate relators’ claims and determine whether to intervene.  Our data shows that, on average, cases remain under seal for over two years, well in excess of the 60-day period specified in the FCA.  However, lengthy investigation periods are not translating to more frequent intervention, as the government elected to intervene in only one in five cases unsealed in the twelve months ended November 30, 2017: 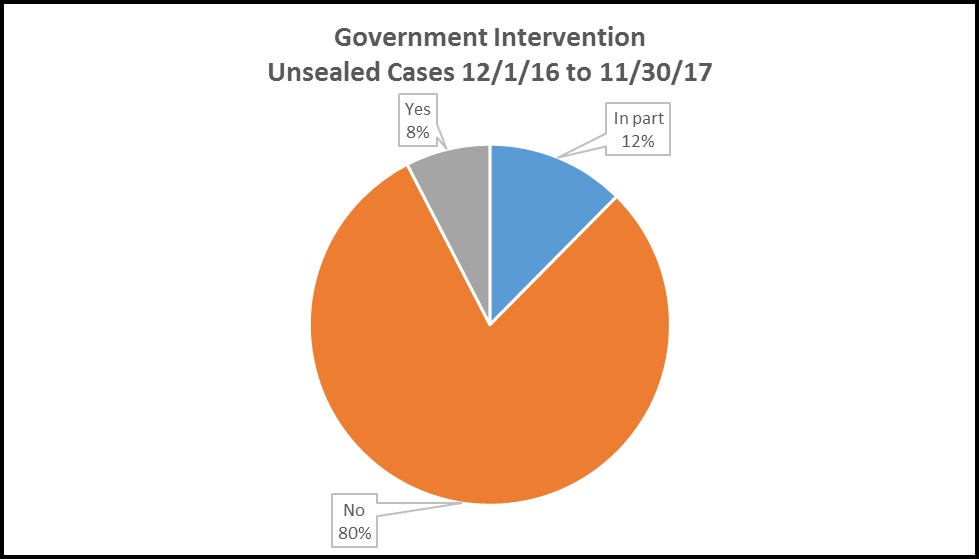 Intervention doesn’t always mean active litigation –13 of the 29 intervened cases were settled or dismissed.  Similarly, declination does not automatically result in abandonment of the claims by the relators.  Of the 116 declined cases, only 51 were thereafter dismissed by the relators.  One case settled, and the remainder went on to be litigated, evidencing a continuing tendency for private relators to move forward with cases that the government declined to take.

Over the past year, relators targeted a broad spectrum of health care-related entities, but the two categories drawing the most lawsuits were physicians (or physician practice groups) and drug companies, followed closely by outpatient clinics and hospice care providers: 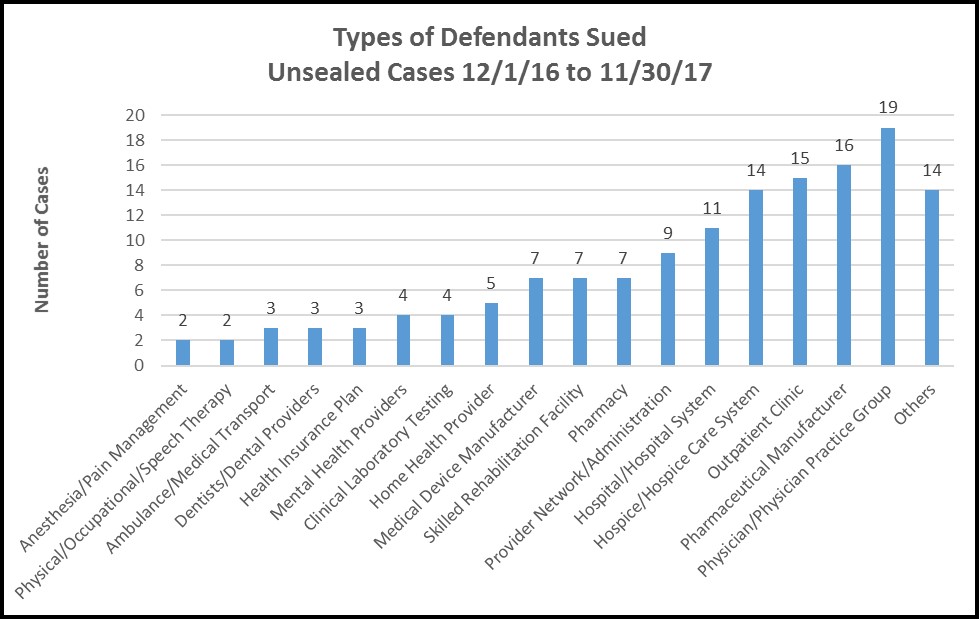 Given the leading role of physicians in the health care system, their presence at the top of this chart is unsurprising.  Likewise, the substantial amount of government reimbursement paid for pharmaceuticals – particularly since the adoption of Medicare Part D – makes it inevitable that drug companies will face a high volume of qui tam claims.  An interesting trend is illustrated by the large number of claims against hospice providers, indicative perhaps of increasing resort to palliative care for terminally ill patients and the growth in services targeted toward the country’s aging population.  It bears watching to see if other types of providers serving elderly populations – such as skilled nursing facilities, skilled rehabilitation facilities and home health providers – likewise move to the top of the qui tam hit list in the coming year.

Qui tam actions are being filed coast-to-coast, but are concentrated in some expected locations.

The qui tam actions unsealed in the twelve months ended November 30 2017 were filed in 57 different districts located in 33 different states.  Looking at how actions clustered by state, we found that large-population states topped the list: 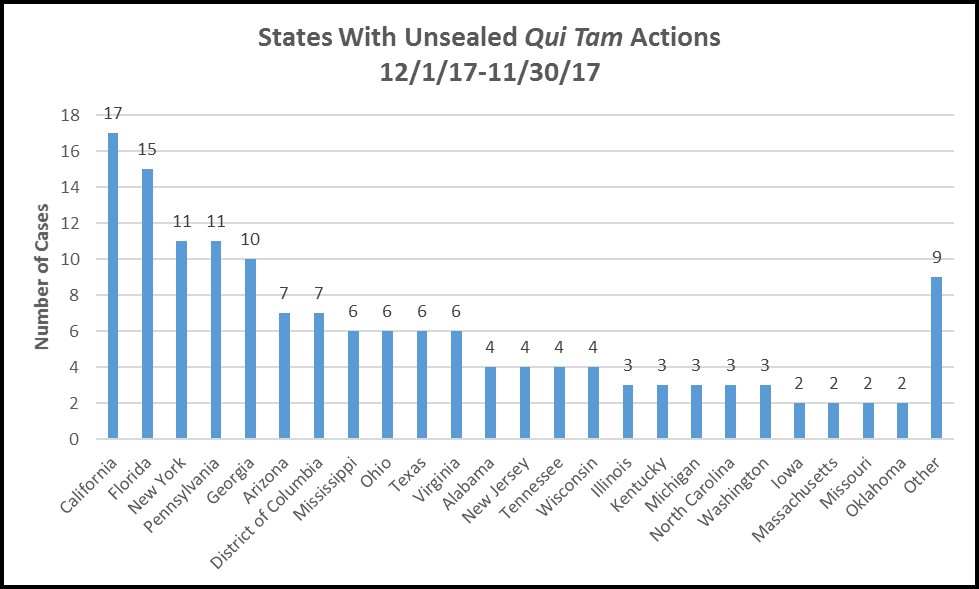 California, Florida and New York - all large states with large populations receiving federally subsidized health care - topped the list, followed by Pennsylvania, a traditional locus for qui tam litigation against drug companies.  Surprisingly, Texas came in the middle of the pack, while volume surged in Georgia, Arizona and Mississippi.  Oddly, Massachusetts only saw two unsealed cases in that same period, despite historically attracting a high volume of relator lawsuits for many of the same reasons as Pennsylvania.

A more nuanced picture is presented by the data for the federal district courts where qui tam actions were unsealed: 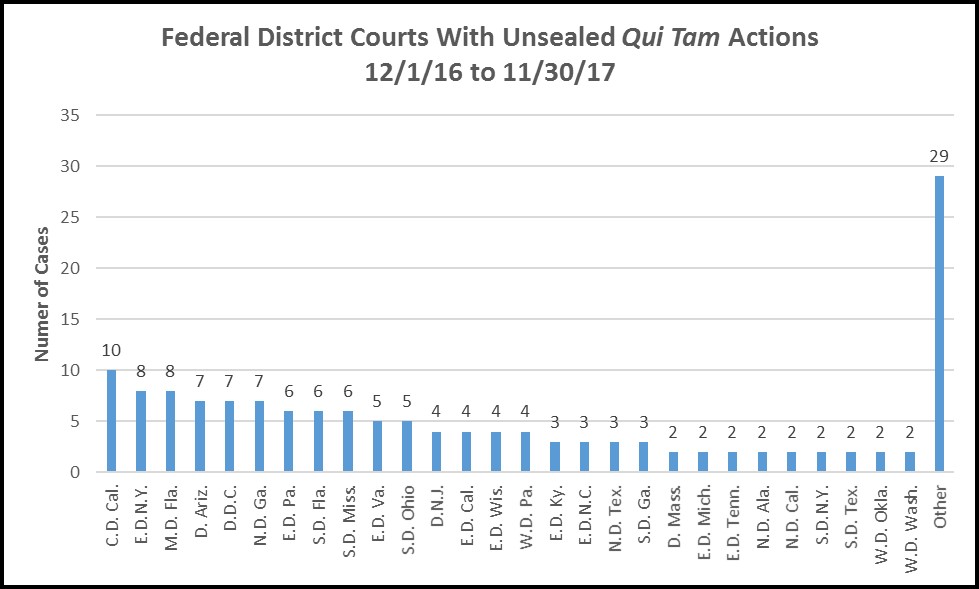 Here, we see that the Central District of California, centered in Los Angeles, was the leading jurisdiction, followed by the Eastern District of New York, which covers Brooklyn, Queens and Long Island, and the Middle District of Florida, which includes Tampa.  But overall, viewed in terms of districts where cases have been filed, volume was widely dispersed.

Relators continue to come primarily from the ranks of current and former employees.

In the cases unsealed between December 1, 2016 and November 30, 2017, four out of five relators were current or former employees: 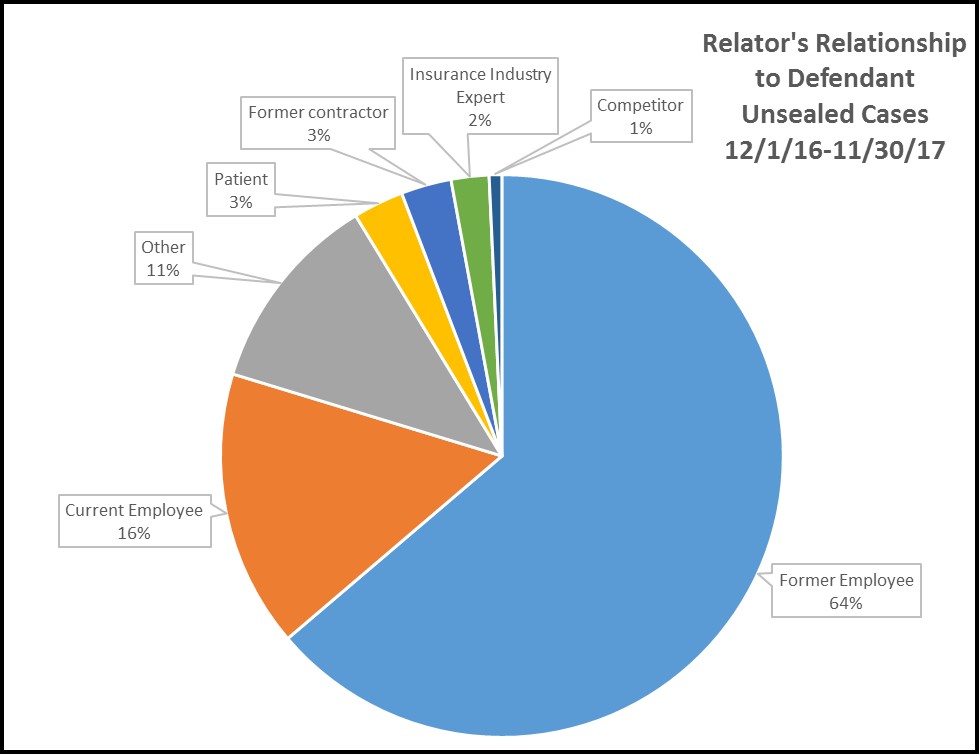 The original source requirement under the FCA makes it natural that employees, who possess an insider’s knowledge as to company activities, would constitute the lion’s share of the relator cohort.  But the fact that 64% of all relators were former employees is instructive, insofar as the wellspring of many qui tam actions is the disgruntlement of terminated employees.  The growing prevalence of plaintiff-side employment lawyers in the qui tam relators’ bar illustrates how recently-fired employees can be channeled into FCA claims when looking for grounds to sue their former employers.  This situation exemplifies the need for entities in the health care sector to handle compliance, employee relations, and terminations in a manner that minimizes discontent and removes bases for employees to claim that issues raised about potential fraud and abuse were not listened to or acted upon.

Although the non-employee share of this pie is somewhat fragmented, the types of entities bringing claims again reflect the imperatives of the original source requirement.  Persons with knowledge of potential FCA violations could include anyone doing business with a health care entity or in that entity’s sector, including patients, competitors and, increasingly, auditors and consultants.  The number of cases being brought by vendors, consultants, and service providers has grown in recent years.  Although it remains to be seen if that trend will continue, entities in the health care sector would do well to be mindful of their relationships with outside vendors or consultants, and take care to provide mechanisms for such entities to report potential fraud and abuse issues to appropriate compliance personnel.

Our Health Care Enforcement Defense team is blogging on its annual review of key government policies, regulations, and enforcement actions in 2017, and the impact these trends are expected to have on enforcement in the year ahead.  We are starting with this look at trends in recently unsealed FCA cases, and we will continue tomorrow with our review and analysis of major case law developments.  And stay tuned for an invitation to our annual webinar, Health Care Enforcement Review & 2018 Outlook, on January 31, 2018.