The Northeast Clean Energy Council (NECEC), the nation’s foremost clean energy advocacy group, recognized our own Tom Burton as one of eight clean energy industry leaders at NECEC’s 10th Annual Green Tie Gala on October 26 in Boston. Tom and the seven other awardees received special “Decade of Influence” Green Tie Gala Awards for their work advancing the clean energy economy over the past decade. Joining Tom in receiving this esteemed honor:

We are proud to have served as a sponsor for this event, which was comprised of 400+ attendees. We congratulate Tom and the seven other clean energy trailblazers on this wonderful accomplishment!

Click here to watch NECEC’s video of the awardees discussing the decade of clean energy growth in the Northeast. 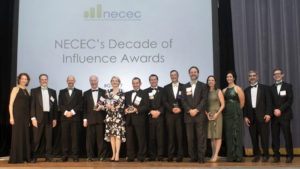 The NECEC team and the eight “Decade of Influence” awardees.[/caption] 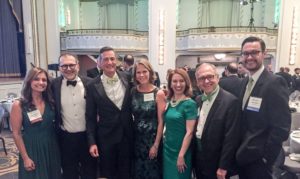 Some of the Mintz Levin and ML Strategies’ attendees.[/caption]

NECEC is the leading voice for clean energy companies in the region, helping sustainable businesses start, scale, and succeed. The council works to influence the energy policy agenda and grow the clean energy economy in an effort to create a world-class clean energy hub in the northeast. The group’s Green Tie Gala is the premiere clean energy networking event and an opportunity to highlight the successes of the region’s clean energy innovators.

Over ten years ago, Tom founded one of the first clean tech legal practices in the nation and has since advised hundreds of clients spanning from start-ups to Fortune 100 companies. Tom has served as counsel in the structuring and completion of over 400 venture capital and private equity financings. His work in this area has raised billions of dollars. Tom also routinely counsels businesses on their growth and development, advises their boards of directors, and participates in an array of transactions, including M&A, IPO and follow on offerings, and joint ventures.

Tom’s passion for innovation runs deep. He is known for helping to form and build the industry by mining innovation, catalyzing finance, acquiring talent, and developing corporate partnerships. In an effort to feed the clean energy ecosystem, he supports early-stage start-ups by serving as a judge for Cleantech Open, MIT’s $100K Pitch Competition, MIT’s Clean Energy Prize, and MassChallenge. Tom was also a key member of the team of business leaders that helped launch NECEC, leading efforts to advocate for the Patrick Administration policy to make clean energy policy a priority for Massachusetts. He continues to advocate for policies that advance the clean energy economy by driving private sector growth.