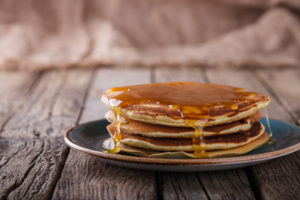 I haven't met many people who don't love maple syrup. Its versatility knows few bounds – traditional pancake or waffle topper, lemonade, salad, and doughnuts come to mind. As you might imagine, the maple syrup industry actively works to protect its product, especially when it comes to alleged imposters.

The latest industry effort was a February 15, 2016 letter from the Vermont Maple Sugar Makers’ Association to the FDA Office of Nutrition, Labeling, and Dietary Supplements (and signed by other maple sugar/maple syrup associations across the country). The letter requests that FDA take enforcement action concerning products that use the term “maple” on their packaging (or images that imply the presence of maple) but do not contain any actual maple syrup. The maple associations argue that such food products are misbranded under the Food, Drug, and Cosmetic Act because they don't comply with the standard of identity ("SOI") for maple syrup, codified at 21 C.F.R. § 168.140.  The letter points out that consumers understand the term "maple" - when used in a food context - to refer to "maple syrup."  VMSMA also has a page on their website titled "What Is Real Maple?" that explains the alleged misbranding issue to the public and states: "We firmly believe this practice to be deceptive and inaccurate if the product contains not a drop of maple syrup."  In its letter to FDA, it takes the position that Agency enforcement is necessary to “protect consumers from deception regarding maple products,” and its website indicates that it has requested similar actions within Vermont from the Vermont Attorney General and the state's agriculture secretary.

The maple syrup industry’s letter to FDA appears to  be part of a larger movement by food companies and organizations to push the Agency to take action to protect consumers from marketplace confusion when competing products don't adhere to standardized food requirements. Indeed, the letter explicitly cites an August 12, 2015 letter from FDA to Hampton Creek that addressed a similar SOI issue in the mayonnaise context, and in which the Agency stated that the word “mayo” had “long been used and understood” to mean “mayonnaise,” also a food that is subject to a Federal SOI. My colleagues blogged in January about Hampton Creek's negotiation with FDA about the label for its "Just Mayo" products.

As far as we know, FDA has not responded to the VMSMA letter from February, nor has it taken specific enforcement against various companies that market products as "maple" when they don't include any maple syrup.  But we will surely hear more about this sweet dispute as 2016 progresses.