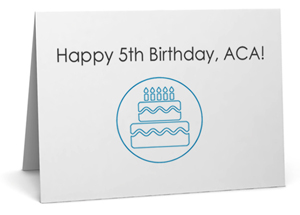 On Tuesday, March 23, 2010, President Obama signed the Patient Protection and Affordable Care Act into law. We want to take this opportunity to share with you some highlights of the past five years, and also to thank you for following our updates and insights on this momentous law! It has been a pleasure to work with all of you and we look forward to many more years of service.

September 23, 2010: The first wave of insurance reforms takes effect, including the “age 26” coverage mandate, the prohibition on rescissions of coverage, and the ban on lifetime and annual limits. Learn more here