New York City is finishing off a strong year on the employment law front.  Earlier this year, the City Council passed laws that banned the box and all but eliminated credit checks.  It also passed a law requiring employers to offer their employees pre-tax transit benefits and instituted a paired testing discrimination investigation program.  The Department of Consumer Affairs continued to provide guidance on the paid sick leave law, while the Commission on Human Rights welcomed a new commissioner and implemented new initiatives designed to enhance the Commission’s enforcement efforts.  It also released enforcement guidance on the ban the box and credit check laws.  Now as the year comes to a close, we cover the latest flurry of additional activity in this three-part series.  In our first installment, we looked at the Commission’s enforcement guidance on gender identity and expression.  In our second installment, we look at a new law banning caregiver status discrimination. 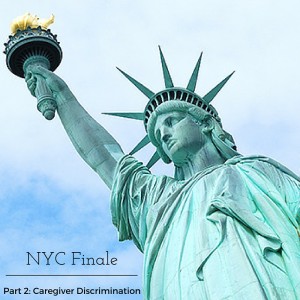 The New York City Council has voted unanimously to amend the New York City Human Rights Law to prohibit discrimination based on an individual’s actual or perceived status as a caregiver.  Below, we briefly summarize the law and gauge its potential impact on the workplace.

Who Does the Law Protect?

The law adds “caregiver status” as the latest protected class under the New York City Human Rights Law.  But just who is a “caregiver”?  The law amends the definitions section of the Human Rights Law to answer that question by defining a “caregiver” as a “person who provides direct and ongoing care for a minor child or a care recipient.”  Okay, but what does that mean?  The law provides definitions for “minor child” and “care recipient,” and it defines those terms broadly:

The law does not however, define what it means to provide “direct and ongoing care.”

This new law also goes further than the law that New York State recently passed that bans “familial status” discrimination.  The difference is that the state law covers only “parent” caregivers whereas the City law goes further by also protecting caregivers to “covered relatives,” and therefore a significantly larger class of protected workers, including many in the so-called sandwich generation.  The state law goes into effect on January 19, 2016 and we expect the City law to go into effect in or around May 2016 (the Mayor has to sign it first and that will start the 120-day effective date clock).

What Does This Mean for Employers?

Just a few years back the EEOC sued Bloomberg L.P. claiming that Bloomberg regularly discriminated against pregnant workers and new mothers returning from maternity leave.  A federal judge – Judge Loretta Preska – said Bloomberg did not engage in discrimination on a systemic level.  Commentators took note of some of the language that Judge Preska included in her decision.  She said that the law does not mandate “work-life balance,” and went so far as to quote GE’s former CEO, Jack Welch: “There’s no such thing as work-life balance.  There are work-life choices, and you make them, and they have consequences.”  She continued: “Mr. Welch’s view reflects the free-market employment system we embrace in the United States, particularly for competitive, highly paid managerial posts,” and the law “does not require companies to ignore employees’ work-family trade-offs — and they are trade-offs — when deciding about employee pay and promotions.”  It was powerful language at the time – coming almost two years before the release of Lean In – and it remains so today.  But, extending legal protection to caregivers could effectively undercut Judge Preska and Mr. Welch’s views.

It also raises all sorts of questions for employers.  Questions like: What are an employer’s obligations if a caregiver requests an alternative working arrangement?  What if a caregiver works unpredictable hours?  What if they request time off to care for a child or family member that may not qualify under other leave policies?

Based on a strict interpretation of this new law, one might reflexively answer these questions by saying that the law does not explicitly require an employer to reasonably accommodate caregivers and that employers cannot be held liable if they otherwise treat caregivers the same as other employees.  (That’s what Judge Preska was essentially saying before caregiver status became a protected class: the Bloomberg policy required “all-out dedication” no matter who you were – if you decided to work less to take care of your children (or for any other reason) you had to live with the consequences and couldn’t claim discrimination).

But of course, the answer is never that simple when dealing with the realities of the modern workplace and worker where differential treatment may operate in more nuanced ways.  For example, workers may claim discrimination where others stopped working with them, or cut them out of important meetings or failed to staff them on the more desirable projects because of a belief that their caregiving responsibilities would make them less reliable or more difficult to work with.

And the answer becomes even less clear once you remember that you are (i) dealing with the New York City Human Rights Law, which requires judges to interpret its provisions broadly, and (ii) read the new law's legislative history.  Councilmember Deborah Rose said plainly during a hearing that the new law would protect “all caregivers from retaliation for requesting a flexible schedule” and otherwise “prohibit employers from punishing workers who request a change in the terms or conditions of their employment as they relate to caregiving responsibilities.”  What does that mean?  How far does that go?  I suspect we’ll be hearing from the Commission on Human Rights on this issue in due course.

In the meantime, employers must think critically about how their policies and practices affect working parents and other caregivers.  They must also think critically about whether their managers have the proper training to avoid differential treatment based on caregiver status, especially when it comes to performance and leave management issues.  It’s one thing to make sure managers do not treat employees differently based on gender or parental status; it’s another thing to make sure they realize that the law now goes one step further: to protect anyone who has direct and ongoing caregiving responsibilities.