As a country we are quickly approaching a time in which most adults will be disqualified from being elected to public office because of something they posted on their social media account while growing up.  Against this backdrop of over-sharing, Snapchat, Inc. won over the hearts of its users with the promise that its mobile application would permit the user to send messages that would “disappear” after a designated number of seconds.  As the popularity of the mobile application grew, so too did concerns regarding its data security practices and its ability to deliver on the promises made to its users.  By December 2012, various methods for accessing or keeping photos and video sent through the mobile app (“snaps”) began circulating on the Internet.  Then, in the final days of 2013, a vulnerability in the application allowed hackers to obtain and publish millions of Snapchat usernames and phone numbers.

The Federal Trade Commission has announced a settlement with Snapchat that will require Snapchat to implement a comprehensive privacy program and submit to monitoring for a period of 20 years.  The FTC’s initial complaint collected statements regarding the disappearance of snaps from Snapchat’s marketing materials and description pages on mobile application platforms.  In the examples highlighted by the FTC, Snapchat assures its users that messages “disappear forever” and that each sender “control[s] how long your friends can view your message.”  Snapchat’s own FAQ includes the following exchange:

Is there any way to view an image after the time has expired?

No, snaps disappear after the timer runs out . . .

In addition, the FTC accused Snapchat of (i) failing to accurately disclose the collection of certain sensitive information in its privacy policy, (ii) deceiving users with descriptions of information processed in connection with using certain app features and (iii) failing to reasonably secure collected information.

Most of the focus on the settlement has been on the implications of ill-advised selfies surviving beyond their intended lifespan, but for mobile app developers, there are a number of key takeaways that highlight the pitfalls and struggles of successfully bringing a product to market: 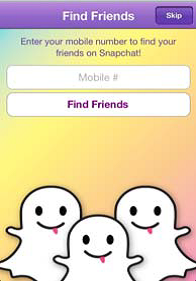 As a result of this combination of factors, a user could conclude that only his or her phone number was being used.  The features considered by the FTC in alleging that Snapchat deceived its users in connection with the Find Friends feature emphasizes the degree to which user expectations matter when it comes to collecting and processing information.  As we’ve previously discussed, user consent may not shield you from all negative consequences if the user doesn’t understand what they are consenting to.  It is also worth noting that in collecting all data from user contacts, the FTC alleges that Snapchat failed to properly secure the collected data or implement a registration process that prevented the creation of fraudulent accounts. The public relations and regulatory issues faced by Snapchat following incidents of fraud and its own data breach are a reminder that the easiest way to reduce your risk profile is to limit data collection to information that is truly necessary, and implement a retention policy that ensures that unneeded and outdated information is securely destroyed.

If you have questions regarding implementing compliance procedures for your application, your Mintz Levin privacy team is here to help.  If, on the other hand, you have questions about what is appropriate to send through Snapchat, we can only advise that in our opinion “duck face” selfies are never okay.