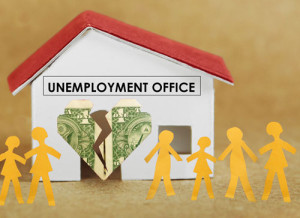 In my last article I promised to examine as part of my Corporate Divorce Series whether alimony (though the politically correct term these days is “spousal support”) is like unemployment (I’m pretty sure it is still acceptable to use that term).

One of the reasons I was inspired to write about this topic is that unemployment appears to provoke the same passionate feelings among employers and employees as alimony does with spouses. So I thought it would be helpful to give some basics about unemployment to give this topic the perspective it deserves.

Unemployment and alimony have similar purposes.  Unemployment is a government program that provides temporary financial assistance to employees who have lost a job through no fault of their own. Alimony is a private legal obligation by one spouse to provide financial support resulting from marital separation or divorce. They are similar financial safety nets.

Who Pays the Employee?

Here is where alimony diverges from unemployment: alimony is paid directly by one spouse to another; unemployment, on the other hand, is administered and paid by the government, but is funded at least in part by a payroll tax on employers.

Who pays what to whom is the biggest point of misunderstanding when it comes to unemployment. It is not the employer who writes the unemployment check to the employee – that check comes from the government.

That doesn’t mean the employer doesn’t pay. Trust me it does. While differing slightly from state to state, each employer is given an unemployment rating.  A rating may take into account how many people the employer has fired in a given year or past years, the size of the employer’s payroll, how other comparable businesses are faring when it comes to firing, and other economic factors.  The rating is then typically translated into a systematic (typically quarterly) tax on the employer’s payroll, funded by employers in most states (and also in part by employees in some states). The rating is then multiplied by the size of the employer’s payroll, resulting in an employer-paid premium to a government fund.  Employees who receive unemployment benefits then collect their checks directly from the government-administered fund.

A court might order spousal support for a variety of reasons, but usually it is awarded when one spouse is not capable of supporting themselves. Unemployment doesn’t work quite the same way because the benefit trigger is the employment has ended without reference to the employee’s financial resources.

What does this mean? In simple terms, a spouse who ends a marriage for any (or no) reason may still receive spousal support. But an employee who voluntarily walks away from a job, or who is fired for engaging in fundamental misconduct gets nothing (in government-speak, they are “disqualified” from receiving benefits).

And here is where the crux of the disputes lie.  For whatever reason, the issue of whether an employee was fired for fundamental misconduct is a very hot topic for employers.  Let’s be clear – “fundamental misconduct” means just that – stealing, assaulting a supervisor, committing a criminal act, and serious violations of workplace rules are a few examples. But arriving late for work, phoning it in, being slothful, negligent, or just performing poorly – those reasons may but typically won’t disqualify an employee from getting unemployment benefits.

Sometimes employers spend time and money fighting an award of unemployment benefits. Why?  I suspect it may sometimes arise out of a sense of principle – an employee who caused the termination (or voluntarily resigned) shouldn’t benefit from that decision.  I also suspect that some employers are concerned that failing to contest a claim somehow impacts a future dispute with the employee (it rarely does). Another reason claims may be contested is a concern that increased claims might increase the unemployment premium tax (similar to how repeated claims on insurance policies might trigger higher premium rates). While it is true that in many cases the number of unemployment claims does impact an employer’s experience rating, it is also true that the actual amount is truly volume-dependent. In other words, when you weigh the cost of a assigning personnel or engaging counsel to contest an unemployment claim against the potential increase in the tax rate, it likely makes little financial sense to take these disputes to the mat.

So Does the Metaphor Hold?

The corporate divorce metaphor works this time around.  While paid from different sources, alimony and unemployment have similar purposes: temporary financial security. They also incite similar passionate responses.  Are those responses worth it? You be the judge.