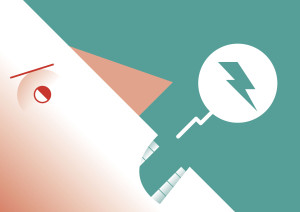 If you have been following my corporate divorce series, you may have read the “Break Up” piece where I advised newly terminated folks to keep their cool if they are unexpectedly fired because their post-firing behavior might impact a severance offer.  Yes, it turns out that your parents were right when they told you that if you have nothing nice to say, don’t say anything at all.  And in the ideal world, everyone would play by that golden rule.  Sadly, that is not the case in the real world.

Apparently this is a big issue for real divorce cases where courts routinely fashion orders preventing spouses from disparaging one another in their children’s presence.  While such court orders are uncommon in employment and other commercial disputes, it is far more common to see private parties contractually agree to play nice after resolving a dispute.

Even though it may stick in our First Amendment craw, it turns out that you can be contractually (and therefore judicially) gagged in the right circumstances.  Here are some things employees and employers should keep in mind when negotiating what is commonly known in corporate divorce as “non-disparagement” provisions.

Some Speech Really is Free

It is perfectly fine to tell someone to refrain from making nasty comments generally, but that contractual agreement will never apply to the government or government proceedings – particularly the kind that require people to raise their right hand and testify truthfully.  While it is a good practice to call out this exception in a non-disparagement provision, the carve-out is not strictly necessary because the obligation to give truthful testimony trumps a private agreement.

Another issue to keep in mind is that some laws – a good example is the National Labor Relations Act – actually encourage “collective” communication regarding workplace conditions, even if those communications are not exactly flattering to an employer.  This law makes employers walk a fine line between asking an employee to refrain from saying nasty things and the employee’s right widely to share what is on their mind with the employer’s workforce at large if it relates to “working conditions” and other legitimate workplace concerns.

What is a disparaging statement?  Most people would agree this means something derogatory – words that paint someone in a bad light.  But given that some people think that any publicity – even bad publicity – is a good thing, it is fair to assume that reasonable people might differ about what is and isn’t disparaging.  One way to avoid this misunderstanding is to clarify that “disparaging” statements include comments that tend to cast someone (or a business) in a poor light, and which are or could be harmful to someone’s business or personal reputation.

A disparaging comment may not necessarily be a defamatory comment.  Defamation – the civil tort that arises from the publication of a false statement – requires that the words be false – the truth of a statement is a complete defense.  A defamatory statement also requires that the words be factual, not someone’s opinion.  A non-disparagement provision should be drafted generously to encompass facts and opinions.

And here is another angle that keeps lawyers up at night.  It is one thing to ask a person to agree that he or she will refrain from doing something.  It is entirely a different thing to impose that obligation on a corporation – with hundreds or even thousands of employees – the vast majority of whom may never have heard of the employee asking for this contractual provision. It is, in essence, asking for a contractual undertaking for which it is difficult if not impossible for a greater-than-one to adhere.  These clauses are therefore routinely limited on the company’s behalf to those people who actually might say the wrong thing.

So with that said, the practical problem inherent in non-disparagement provisions is twofold: proof and enforcement.  If a statement is not written (or posted on Instagram), it is difficult if not impossible to prove without resorting to he said/she said.  And even if the words were uttered in violation of a provision, what are the damages?  Unless you contractually quantify the damages in advance (something called liquidated damages, which are not always available), the traditional formula of contract damages doesn’t really do justice to the harm.  And no court will issue an order preventing someone from doing something unless you can prove the person is really going to do it.  But then again, if a non-disparagement provision is important to the resolution of a dispute, any money that changes hands in exchange for it could be up for grabs in the face of a breach.

So where does that leave non-disparagement provisions?