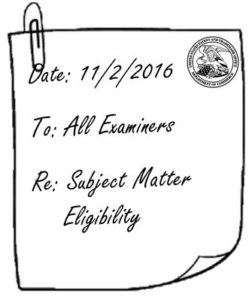 On November 2, 2016 the United States Patent and Trademark Office (USPTO) issued a memo to Examiners on its stance on subject matter eligibility in response to the McRO and BASCOM Federal Circuit decisions, previously discussed at Global IP Matters here and here. The USPTO will be updating its subject matter eligibility guidance in view of these decisions and also the Amdocs decision, which issued the day before the USPTO published its memo and thus is not addressed therein.

In McRO, the Federal Circuit held claims patent eligible based on the incorporation of particular claimed rules in computer animation that “improved [the] existing technological process” by allowing the computer to do something it could not previously do.  In light of McRO, the USPTO instructed Examiners to not overgeneralize the claim or simplify it into its “gist” or core principles, when identifying a concept as a judicial exception.

The memo emphasized that “improvement in computer-related technology” is not limited to improvements in the operation of a computer technology per se, but may also be found in a claimed set of rules that allow the computer to perform a function not previously performable by a computer.  Examples of when to find improvements in computer-related technology include: (1) a teaching in the specification of how the claimed invention improves a computer or other technology; and (2) a particular solution to a problem defined by the claimed invention, rather than a claim directed to the idea of a solution or outcome.  This provides clearer guidance to practitioners on what to include in a specification and should also pave the way for true software-based innovations to be allowed by the general examining corps, without resorting to pre-appeal and appeal options.

The memo touches on the issue of preemption, but only so far as to rebut an Applicant’s rebuttal of an Examiner’s finding of subject matter ineligibility.  To perform this rebuttal Examiners have been instructed to follow the McRO and BASCOM guidance, which they should have been doing in the first instance.

Examiners that we have spoken to since the memo was published find the guidance provided therein to be troubling.  They feel that the USPTO has moved from an “allow nothing” stance to an “allow everything” stance.  This is not unique and follows the same pattern seen in the aftermath of KSR.

Applicants should feel relieved that the law surrounding subject matter eligibility is falling in-line with modern innovation.  Both the courts and the USPTO have shown understanding that innovation can be found in software and this should lead to a renewed faith by inventors that their inventions will be protected.