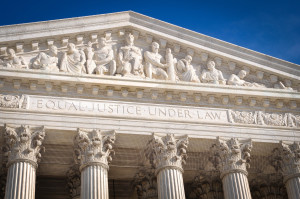 The United States Supreme Court ruled Tuesday that Tyson Foods employees could use representative evidence to establish liability and damages for class certification purposes.  The opinion gives the plaintiffs' class action bar a second victory in the Court's current term, albeit a far narrower one than many commentators had feared.  (We covered the first victory here.)  Perhaps, more importantly, the Court sidestepped a seemingly more controversial issue regarding whether a class may include uninjured class members.  That issue will have to be decided another day.  We analyze the Tyson Foods opinion below.

The case before the Supreme Court was Tyson Foods v. Bouaphakeo, in which several workers in the kill, cut, and retrim departments of a pork processing plant in Iowa paid on a “gang time” basis sued Tyson under the Fair Labor Standards Act and the Iowa Wage Payment Collection Law alleging overtime violations.  They claimed Tyson should have paid them for the time they spent putting on and taking off protective gear, because this activity was ‘integral and indispensable” to their regular work.  (For a more in-depth analysis on whether pre- and post-work activities are compensable, read our prior blog post here.)  Tyson did not keep records of the time these employees spent donning and doffing this gear.

The trial court certified a class on the basis that there were common questions over whether these activities were compensable.  At trial, the court allowed the plaintiffs to introduce statistical evidence that asked the jury to treat all class members as an average class member for purpose of measuring the time they spent donning and doffing their gear.  The Court permitted this evidence even though the plaintiffs could not dispute that each of them spent different amounts of time changing gear and some spent no time at all.  The jury returned a $2.9 million verdict in the plaintiffs’ favor, but did not reveal the methodology they used in reaching this number.

After the verdict, Tyson appealed claiming that the lower court should have never certified a class because of the variations in the donning and doffing times and because the class captured workers who did not work overtime even with the time spent changing.  The Eight Circuit Court of Appeals disagreed with Tyson, and the case then made its way to the Supreme Court.

The Supreme Court’s ruling in the workers’ favor did not focus on whether the time these workers spent “donning and doffing” the protective gear was “integral and indispensable” to their work as required by the FLSA.  Tyson conceded that question was common to all class members for class purposes.  The ruling focused on whether the plaintiffs could utilize the representative evidence (of the time spent donning and doffing by the “average” class member) to support classwide relief.

The majority noted that representative samples or other statistical evidence is often relevant in proving an individual’s claim.  For example, in off-the-clock cases, where employers have not maintained time records, employees still have to show that they actually performed the uncompensated work, and in doing so they may be permitted to introduce a representative sample to fill in this “evidentiary gap.”  Otherwise, employees may have an “impossible hurdle” in meeting this evidentiary burden.

The Court then stated that there was no reason to reject such statistical evidence simply because the claim is brought on behalf of a class instead of individually, and “[i]f the sample could have sustained a reasonable jury finding as to hours worked in each employee’s individual action, that sample is a permissible means of establishing the employees’ hours worked in a class action” (emphasis ours).  In other words, the Court expressly declined to rule out the use of representative evidence in class actions.

But the Court also refused to proffer “broad and categorical rules governing the use of representative and statistical evidence in class actions.”  Rather, as the Court said, the ability to use a representative sample in class actions will depend on the purpose for which the sample is being introduced and the nature of the underlying cause of action.  More specifically, whether a representative sample may be used to permit class certification is largely a question of evidentiary analysis: is the statistical sample relevant and admissible?

The Court found that a “representative or statistical sample, like all evidence, is a means to establish or defend against liability.”  The admissibility of such evidence “turns not on the form of a proceeding takes – be it a class or individual action – but on the degree to which the evidence is reliable in proving or disproving the elements of the relevant cause of action.”  Here, the Court found the representative sample to be the only practical means to collect and present the relevant data needed to establish damages for the class.  And it further noted that Tyson could have contested the use of the sample by arguing that it was unrepresentative or inaccurate or otherwise unreliable, but it chose not to do so.

Commentators were watching to see how the Tyson Court would account for the Court’s 2011 landmark class action decision in Wal-Mart Stores, Inc. v. Dukes.  The answer is that the Court said its decisions in the two cases are consistent.

In Wal-Mart, female employees spread out across the country and working for different supervisors attempted to use statistical evidence of disparities in pay and promotion between men and women to establish the existence of a company-wide policy of discrimination victimizing all of the potential class members similarly.  The Court ruled in Wal-Mart that statistical evidence could not be used to establish commonality, because use of such statistical evidence would not be appropriate to prove an individual’s own claim of discrimination, and therefore allowing in on a class wide level was likewise not permissible.

Unlike Wal-Mart, where the employees worked in different locations, had different supervisors who made independent decisions regarding pay and promotions, the employees in Tyson worked in the same facility, did similar work, and were paid under the same “gang-time” policy, and therefore, could have introduced the statistical evidence to prove their own claims.

The Question Left for Another Day:  Whether a Class Can Include Uninjured Class Members

The question in Tyson that most interested class action attorneys was whether it is proper to certify a class that includes uninjured class members.  The class approved by the lower courts included anyone who changed their gear even if they did not work in excess of 40 hours per week, and, therefore, would not be entitled to overtime pay.

While noting that this is an issue of “great importance,” the Court declined to answer this question, concluding that the district court must take it up first.  The Court did however suggest that a class can include uninjured class members when there is a feasible mechanism to exclude them from contributing to the size of the damages award and later recovering on the damages award.  Whether there was any such mechanism here was for the district court to decide.

Before concluding its opinion, the majority did take a parting shot at Tyson.  It said that this was largely a problem of Tyson’s own making because it refused to bifurcate the liability and damages phases of the proceeding for the “precise reason” that it may be difficult to remove uninjured class members from the class.  The majority then invited the district court to consider that fact when determining whether it was necessary to set aside the jury verdict.

In a concurring opinion, Chief Justice Roberts expressed a deep concern that that the district court would be unable to “fashion a method for awarding damages only to those class members who suffered an injury.”  The $2.9 million verdict was just an aggregate number and the parties had no way of knowing how it was calculated, especially since the jury did not identify the specific donning or doffing time spent by the average worker.  Without that number, there was no way of knowing which class members worked overtime and which did not.  Therefore, the Chief Justice questioned whether the jury verdict could stand.  Further, Chief Justice Roberts (and the two dissenting justices, Thomas and Alito) agreed that Tyson’s bifurcation decision, no matter how questionable, should be irrelevant to district court’s analysis.