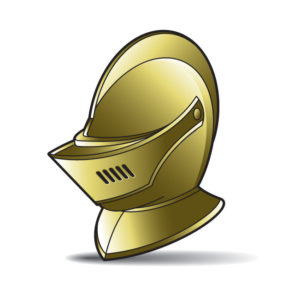 In June 2016, the National Hockey League (NHL) announced that Las Vegas would be awarded an NHL franchise team, the first major professional sports team in the city and the first new expansion team for the NHL in over fifteen years.  The team announced its name in November—the “Vegas Golden Knights.”  But just a few weeks later, on December 7, the team’s trademark application for the name in connection with “entertainment services, namely, professional ice hockey exhibitions” was refused by the U.S. Patent and Trademark as likely to be confused with a registered trademark for GOLDEN KNIGHTS THE COLLEGE OF SAINT ROSE, owned by the College of Saint Rose, a Division II member of the NCAA with no hockey team.

The examining attorney perceived the “GOLDEN KNIGHTS” portion of both marks to be dominant and confusingly similar in both appearance and with respect to the nature and trade channels of services.  According to the examiner, the stylization of the registered “GOLDEN KNIGHTS” mark appeared larger and centered, causing “the College of Saint Rose” to appear as a mere “tagline.”  Similarly, the examiner considered “Vegas” in the NHL’s “VEGAS GOLDEN KNIGHTS” to be a mere geographical description of origin of goods or services and also less dominant.  The examining attorney thus found the marks identical in their most prominent portions and confusingly similar when compared as a whole.

The Office also refused the NHL’s application because the services associated with both marks involved entertainment in the form of sports exhibitions, even though one concerns professional hockey and the other general collegiate sports.  The examiner explained that services need not be competitive, just related in some manner so as to convey the mistaken belief that the goods or services come from the same source. Therefore, because both services (professional hockey and collegiate sports) are similar (both are televised, have large followings, are in some instances even played in the same large arenas, and college players are drafted into professional leagues), the examining attorney found the applied-for mark and the registered mark to have confusingly similar services.

The Vegas Golden Knight’s trademark application is not dead, however.  The team intends to respond to the office action within the allotted 6-month time frame.  There could also be a legitimate case to be made by the Vegas Golden Knights that the two trademarks can coexist.  For example, many sports teams share the same name and own trademarks related to that name in athletic services.  For example, the New York Rangers (NHL) and the Texas Rangers (MLB) use a similar “Rangers” name, and both have registered trademarks to those names.  The New York Rangers have active design plus words and typed drawing marks for “New York Rangers” in connection with clothing, novelty items, and professional ice hockey exhibitions.  The Texas Rangers have a variety of registrations for a design plus words mark containing “T TEXAS RANGERS” in connection with clothing, novelty items, and entertainment services such as baseball games.  Certainly the same similarity analysis could apply to these marks, yet they have been allowed to coexist.  Thus it seems likely that the Vegas Golden Knights might prevail and obtain federal protection for its VEGAS GOLDEN KNIGHTS mark, perhaps even in time for its first season next fall.