He has extensive experience in handling patent matters for emerging and global high-technology companies as well as universities, and draws on his litigation experience to develop high-value patent portfolios. Pedro has also litigated patent infringement and validity disputes before several US district courts, in matters involving multiple patents and complex technologies. More recently, Pedro represented a Finnish-based patent owner in an IPR, in which all claims of the patent were found valid.

Before joining Mintz, Pedro worked for an international intellectual property law firm in Washington, DC. Before beginning his legal career, Pedro gained over 12 years of technical experience in engineering positions with the US Air Force, National Security Agency (NSA), and technology companies. As an Air Force engineer, Pedro developed and tested a variety of advanced communication systems as well as advanced image processing systems. He also gained experience in the semiconductor field while working at KLA Instruments. Next, Pedro was employed as a principal member of the technical staff at Litton/TASC in Annapolis Junction, Maryland. In this position, he consulted on a variety of communication and computer/network security matters.

Pedro has also lectured on intellectual property, including a presentation on “De-Mystifying Intellectual Property” to technology entrepreneurs at the University of New Mexico and Stanford University. More recently, he moderated a panel on “Effectively Leveraging Your IP to Finance Your Start-Up” at the University of California, San Diego, participated as a panelist at the San Diego Daily Transcript’s IP Roundtable on Patent Quality, and lectured on "Entrepreneurial Best Practices" at the UC Berkley Haas School of Business.

About Pedro, clients told Chambers USA researchers, "He is one of best prosecution patent attorneys I have worked with", and "He has a very high standard of quality. He commands the same from his associates so we have a cohesive team.”

Pedro is a Lieutenant Colonel (retired) in the US Air Force Reserves. 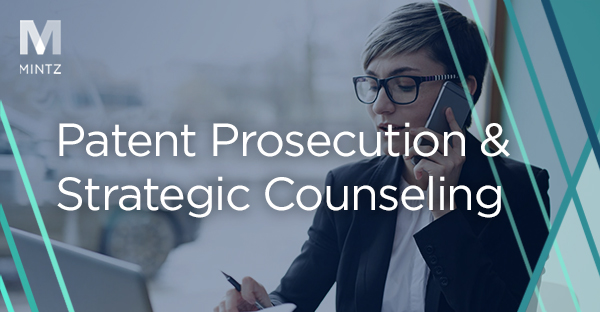 Indefiniteness: Are You Reasonably Certain?

Pedro F. Suarez, a Member of Mintz's Intellectual Property Practice, was recently named a member of the Board of Directors for technology incubator EvoNexus. Mr. Suarez will be joining representatives from EvoNexus sponsor companies and industry advisors.

Indefiniteness: Are You Reasonably Certain?

The indefiniteness standard has, until recently, been very high—only an “insolubly ambiguous claim” was considered indefinite (see, e.g., Honeywell Intern., Inc. v. International Trade, 341 F. 3d 1332, 1338–9 (Fed. Cir. 2003))—but recent events have made it easier to invalidate a claim as being indefinite.
Read more

Pedro F. Suarez, a Member of Mintz's Intellectual Property Practice, was recently named a member of the Board of Directors for technology incubator EvoNexus. Mr. Suarez will be joining representatives from EvoNexus sponsor companies and industry advisors.