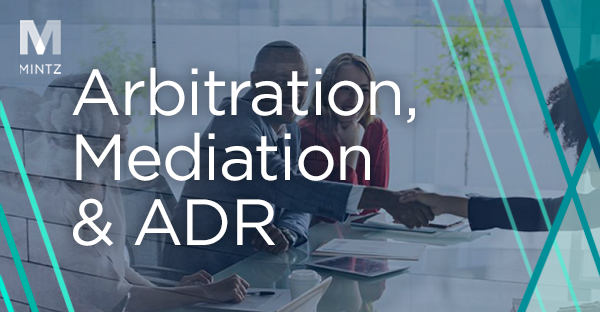 Here is reason for hope for those who face with trepidation the prospect of enforcing an international arbitration award in India.  On June 2, 2020, the Supreme Court of India (“ISC”) confirmed the enforceability there of a foreign arbitral award that was rendered in accordance with a “two-tier arbitration” agreement. Among other things, the court rejected the dreaded catch-all “Indian public policy” defense as raised by the respondent.  This is the latest in what seems to be a trend of pro-arbitration enforcement decisions by the ISC, and may help to alleviate some of the many anxieties concerning the enforceability generally of international arbitral awards in India.
Read more

Arbitration Subpoenas: Jurisdiction and Venue Basics for Enforcement Made Simpler

The statutory mechanism for judicial enforcement of an arbitration “subpoena” – in actuality, an arbitrator’s summons to give evidence -- is simply by petition to “the United States District Court for the district for which such arbitrators, or a majority of them, are sitting….” Federal Arbitration Act (“FAA”) § 7, 9 U.S.C. § 7.  But U.S. law regarding the limited subject matter jurisdiction of its federal courts, coupled with Congress’ omission to provide for such jurisdiction in chapter 1 of the FAA, makes for significant potential complexity at the threshold of enforcing an arbitral subpoena issued in connection with a domestic arbitration.  Fortunately, the Second Circuit Court of Appeals recently simplified such matters a bit.
Read more

Is the “Clear and Unmistakable” Hurdle for Delegation of Arbitrability Issues to an Arbitrator Uniform or Variable?

The United States Supreme Court established that questions of arbitrability are presumptively for a court unless the parties clearly and unmistakability manifest their intention (i.e, agreement) that such issues should be determined by an arbitrator in the first instance. But is the “clear and unmistakable” standard uniform in all circumstances or variable?
Read more

The Mischief That Arbitrators May Do: Clause Construction Award Enables Class Arbitration

If we needed a reminder of why the “delegation” question – i.e., whether parties have agreed that gateway arbitrability issues should be adjudicated in the first instance by an arbitrator rather than by a court – is important, a recent decision by the Fifth Circuit Court of Appeals should do in the trick.  In Sun Coast Resources, Inc. v. Conrad, 2020 U.S. App. LEXIS 12149 (5th Cir. April 16, 2020), an arbitrator had issued a “clause construction award” to the effect that an arbitration agreement that did not mention class or collective arbitration nonetheless permitted it, and the Court held that there was no turning that train around.
Read more

Momentum Building for Applicability of 28 U.S.C. §1782(a) to Obtain Discovery for Use in Foreign or International Private Arbitrations

In 1948, the United States first promulgated a unique statutory mechanism by which, via its 1964 amendment, an interested person could receive judicial assistance in obtaining evidence in the U.S. for “use in a proceeding in a foreign or international tribunal . . . .”  See, 28 U.S.C. § 1782(a).  Whether a private arbitration was such a “foreign or international tribunal” became a prominent issue after the U.S. Supreme Court arguably opened the door in that regard via dictum in its decision in Intel Corp. v. Advanced Micro Devices, Inc., 542 U.S. 241 (2004).  While the federal District Courts have broadly split on the question, the current momentum in the federal Circuit Courts of Appeals favors the applicability of the statute with respect to such arbitration proceedings.
Read more

Another Federal Court (in the Ninth Circuit) Holds That 28 U.S.C. § 1782 Applies With Respect To Foreign Private Arbitrations

A federal court in the Northern District of California has adopted the reasoning and conclusion of a recent Sixth Circuit decision in holding that 28 U.S.C. § 1782 applies to private foreign/international arbitrations.  See, HRC-Hainan Holding Company, LLC v. Hu, 19-MC-80277, 2020 U.S. Dist. LEXIS 32125 (N.D. Cal. Feb. 25, 2020).  This adds to the split among federal courts concerning the issue of the applicability of this federal “judicial assistance” statute to private commercial adjudicatory proceedings.

Are there circumstances in which forum non conveniens is a viable defense in the U.S. to a petition to confirm an arbitration award that is subject to the Convention on the Recognition and Enforcement of Foreign Arbitral Awards (the “New York Convention”)?  Could or should a U.S. court having jurisdiction abstain from taking up the matter in favor of a foreign court on the grounds that the U.S. court is “inconvenient”?  A federal court in the D.C. Circuit recently reaffirmed that it should not.

Battles persist concerning the enforceability of insurance policy arbitration clauses due to the conflict between (a) the U.S. Constitution’s Supremacy Clause (Art. VI, cl. 2), which gives federal laws and international treaties preemptive authority over conflicting State law, and (b) the McCarran-Ferguson Act, which gives State insurance laws reverse-preemptive authority over federal statutes that interfere with State regulation of the insurance business.  A recent federal District Court decision in the Ninth Circuit offers support for the proposition that a key provision of an important arbitration-related treaty -- the New York Convention -- is self-executing, is not reverse-preempted by McCarran-Ferguson, and thus may be a basis, where applicable, for compelling arbitration of insurance coverage disputes.
Read more

Under the Federal Arbitration Act (“FAA”), “a party may not be compelled . . . to submit to class arbitration unless there is a contractual basis for concluding that the party agreed to do so.”  Stolt-Nielsen S.A. v. AnimalFeeds Int’l Corp., 559 U.S. 662, 684 (2010).  The Eighth Circuit Court of Appeals recently sharpened that rule a bit to require “an affirmative contractual basis” to conclude that the parties agreed to class arbitration.  See Catamaran Corp. v. Towncrest Pharm., 2020 U.S. App. LEXIS 753 (8th Cir. Jan. 10, 2020) at *5.

As discussed in earlier posts, the Federal Arbitration Act (“FAA”), 9 U.S.C. §§ 1, et seq., does not itself provide an independent basis for subject matter jurisdiction over federal court proceedings concerning domestic arbitrations. (In contrast, where the New York Convention applies -- in cases of international or non-domestic arbitrations -- the FAA does itself establish a federal district court’s subject matter jurisdiction over such matters. See FAA § 203, 9 U.S.C. § 203.) Therefore, absent diversity or maritime jurisdiction, a post-award petitioner to confirm or vacate or modify a domestic arbitral award in federal court (under FAA §§ 9, 10, or 11, respectively) must show federal question jurisdiction under 28 U.S.C. § 1331. And, as is often the case regarding jurisdiction issues in the U.S., the federal courts of appeals are split on the analysis that should be made in that regard.

“Class arbitration” signifies the utilization of the Fed.R.Civ.P. 23 protocol in an arbitration proceeding.  A fundamental question among many concerning the legal viability of “class arbitration” is whether an arbitrator can issue an award that binds a person who is not a party to or otherwise deemed by law bound by the bilateral arbitration agreement upon which the arbitral proceeding and the arbitrator’s authority are founded -- e.g., a non-appearing non-party putative class member.  SCOTUS has signaled, but not held, that that is a dubious proposition.  The Second Circuit recently identified circumstances in which, it opined, the courts may not vacate an arbitral award permitting “class arbitration,” and that award may bind all putative members of a class, including non-appearing non-parties to the controlling arbitration agreement.  See Jock v. Sterling Jewelers, 2019 U.S. App. LEXIS 34205 (2d Cir. Nov. 18, 2019) (“Jock”).  That decision is open to criticism.
Read more

When is an Interim International Arbitral Award “Final” Enough for Judicial Enforcement?

A federal court must of course have subject matter jurisdiction to entertain an application to confirm or enforce an arbitration award.  Fortunately, that jurisdiction is, in general, provided by statute when it comes to arbitral awards that are subject to the Convention on the Recognition and Enforcement of Foreign Arbitral Awards (the “New York Convention”).  See Federal Arbitration Act (“FAA”) § 203, 9 U.S.C. § 203.  However, several federal courts have determined that they lack subject matter jurisdiction, pursuant to FAA § 203, to confirm or enforce an “interim” international arbitration award.  But just what qualifies as “interim” is not always clear.
Read more

Federal Courts Should Rethink the Personal Jurisdiction Requirement of 28 U.S.C. § 1782

The increasingly popular federal statute concerning cross-border judicial assistance, 28 U.S.C. § 1782, enables a District Court to order a “person” that “resides or is found” within its jurisdiction to produce evidence for use in a proceeding in a foreign or international tribunal.  The Second Circuit recently addressed two questions concerning the application of this unique legislation:  (1) on what bases does a District Court have personal jurisdiction over a non-party for purposes of the statute (how does a court interpret and apply the “resides or is found” criteria in jurisdictional terms); and (2) can the District Court order such a person to produce evidence that it maintains outside of the U.S.?

The increasingly popular federal statute concerning cross-border judicial assistance, 28 U.S.C. § 1782, enables a District Court to order a “person” that “resides or is found” within its jurisdiction to produce evidence for use in a proceeding in a foreign or international tribunal.  The Second Circuit recently addressed two questions concerning the application of this unique legislation:  (1) on what bases does a District Court have personal jurisdiction over a non-party for purposes of the statute (how does a court interpret and apply the “resides or is found” criteria in jurisdictional terms); and (2) can the District Court order such a person to produce evidence that it maintains outside of the U.S.?  See In re del Valle Ruiz, 2019 U.S. App. LEXIS 30002 (2d Cir. Oct. 7, 2019).
Read more

The inclusion in arbitration clauses of a waiver of public injunctive relief has gained popularity generally, but such a waiver is currently unenforceable in California.  However, California’s controversial precedent on the subject may be heading for review by an en banc Ninth Circuit panel or, ultimately, the U.S. Supreme Court.
Read more

Can a Settlement Agreement Be Converted to an Arbitration Award That is Enforceable Under the New York Convention?

Here is an interesting scenario:  the parties to a cross-border commercial relationship have a dispute; they have an agreement to arbitrate; arbitration is contemplated (or perhaps even commenced); the parties settle before there are any significant arbitral proceedings; they engage an arbitrator to render an award that comprises the settlement terms; and such an award is issued “on consent”. Later, one party seeks to confirm and/or enforce the award in the United States. But -- spoiler alert -- that settlement agreement/arbitral award might not be confirmed or enforced under the New York Convention.
Read more

Attacking An Inexplicable Arbitration Award: “Manifest Disregard of the Law” Or Something Else?

What to do with an arbitration award that appears to be fatally internally inconsistent and provides no explanation or reconciliation of the inconsistency?  For lack of something better to say, perhaps tee up the elusive “manifest disregard of the law” doctrine as a basis to seek vacatur of the award.  See, Weiss v. Sallie Mae, Inc., No. 18-2362, 2019 U.S. App. LEXIS 27476 (2d Cir. Sept. 12, 2019).  Or is the award’s defect that it is not adequately “reasoned” and therefore constitutes an imperfect execution of the arbitrator’s powers under FAA § 10(a)(4)?  The Second Circuit recently wrestled with the problem . . . and punted.
Read more

New Convention Aims to Make Mediated Settlements an Attractive Means of Resolution of International Disputes . . . But Will It?

The United States joined 45 other countries on August 7, 2019 as the initial signatories of the UN Convention on International Settlement Agreements Resulting from Mediation (the “Singapore Convention”).  Other notable vanguard signatories included China, India, South Korea, and of course Singapore.  The aim of this Convention is to make mediated international settlement agreements as easily enforceable as international arbitration awards now are under the New York Convention.  But is it likely to succeed?  We think it could ... to a degree.
Read more