Joe is a seasoned antitrust attorney and Co-chair of the firm’s Antitrust Practice. He has nearly 30 years of experience that spans roles in private practice, as a general counsel, and with federal antitrust enforcement agencies. He focuses his practice on providing strategic transactional advice and representing clients in government investigations and merger reviews. Joe primarily works with clients in the health care industry.

His work includes representing health care companies before the FTC and DOJ in merger reviews, counseling them on the antitrust aspects of transactions, and advising on risks associated with payer-provider contracting. He also advises pharmaceutical distributors, hospitals, health plans, and physician groups on a broad range of compliance issues, including information sharing, contractual arrangements, and interactions with competitors.

Prior to joining Mintz, Joe was a partner at a Washington, DC-based international law firm, where he was on the steering committee of the firm’s Antitrust Group as well as a member of the firm’s Health Care Group.

Before returning to private practice, Joe was the general counsel of a national trade association for the health insurance industry. Along with supervising a team of attorneys, he served as the association’s policy lead on health care competition issues, regularly testifying before Congress, advocating for positions at FTC policy roundtables, and participating in health care symposia.

Earlier in his career, Joe served as Assistant Chief of the Health Care and Consumer Products Section of the US Department of Justice’s Antitrust Division, a lead attorney on DOJ antitrust investigations in multiple industries, and a trial attorney in the Federal Trade Commission's Bureau of Competition. 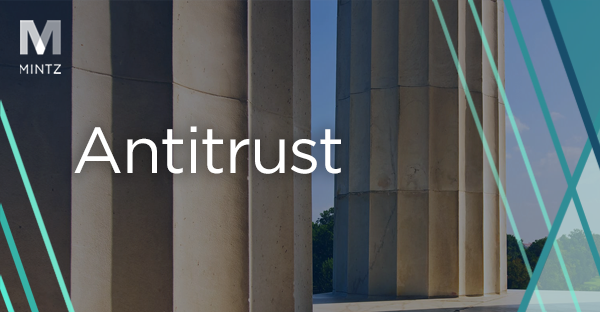 This webinar, hosted by the American Health Lawyers Association, will provide background on prior antitrust agency vertical merger enforcement, an in-depth discussion of the new Vertical Merger Guidelines, and analysis on how these new Guidelines may impact vertical integration in the health care industry going forward.

AHLA Annual Meeting: Will Your Deal Be Caught in the Maw of Antitrust Review?

Back in December, we wrote about a district court ruling rejecting the Federal Trade Comission’s (“FTC”) motion to enjoin the proposed combination of Thomas Jefferson University (“TJU”) and Albert Einstein Healthcare Network (“Einstein”) that would create an 18-hospital system in the Philadelphia area. The FTC and the Pennsylvania Attorney General had alleged the merger would lead to TJU/Einstein controlling at least 60% of the inpatient GAC hospital services market in a portion of Philadelphia. Following the district court decision, the FTC quickly appealed to the Third Circuit Court of Appeals and filed an emergency motion for a stay pending appeal. Days later, a three-judge panel denied the government’s motion without comment.
Read more

This alert examines a Philadelphia US district court decision that denied the FTC’s and Pennsylvania Attorney General’s request to preliminarily enjoin a proposed merger between Thomas Jefferson University and the Albert Einstein Healthcare Network.
Read more

Another One Bites the Dust – N.D. Tex. Dismisses Antitrust Claims re FRAND Commitments with Prejudice

In the latest decision addressing antitrust liability for FRAND commitments, Judge Barbara M. G. Lynn of the Northern District of Texas dismissed a complaint from Continental Automotive Systems, Inc. (“Continental”) alleging, inter alia, violations of §§ 1 and 2 of the Sherman Act, and declaratory judgment as to FRAND obligations against Avanci, LLC (“Avanci”) and various members of its patent pool (collectively, “Defendants”).
Read more

DOJ to IEEE: Yes, Injunctive Relief Should Be Available for SEPs, and Stop Saying Otherwise

In a reversal that came as no surprise to many observers, on Tuesday, August 11, 2020, a unanimous panel of the U.S. Court of Appeals for the Ninth Circuit reversed the decision by the U.S. District Court for the Northern District of California in FTC v. Qualcomm and vacated the district court’s worldwide, permanent injunction prohibiting several of Qualcomm Incorporated’s (“Qualcomm”) licensing practices with respect to standard-essential patents (“SEPs”) covering cellular technology.
Read more

Justice Department Files Suit to Enjoin Acquisition of Minority Share of Community Hospital; Shows Pitfalls of A Merger “Plan B” and Provides Roadmap of What Not to Say During Deal Negotiations

On Wednesday, an FTC Commissioner used the occasion of a routine report to Congress to send a warning shot to private equity firms, especially those rolling up health care providers. Commissioner Rohit Chopra, an advisor to Senator Elizabeth Warren before he joined the Commission in May 2018, released this statement focusing particular scrutiny on private equity (PE) firms and the practice of acquiring physician groups, especially emergency medicine, anesthesiology, and other services that generate “surprise” out of network charges for otherwise insured patients.
Read more

In a recent decision in In Re Humira (Adalimumab) Antitrust Litigation), No. 19-cv-1873, Judge Shah of the Northern District of Illinois dismissed a consolidated class action complaint filed by U.S. purchasers of AbbVie Inc.’s blockbuster biologic drug Humira alleging that AbbVie had prevented manufacturers of competing biosimilar drugs (“biosimilars”) from entering the U.S. market in violation of federal and state antitrust laws.
Read more

Mintz Advises QIAGEN in its $11.5 Billion Sale to Thermo Fisher

Firm plays a key role in the largest health care acquisition to date in 2020.

An article published by The National Law Journal highlighted the arrival of Joseph Miller as Co-chair of Mintz’s Antitrust Practice and a Member in the firm’s Health Law Practice, based in Washington, D.C. Mr. Miller is a seasoned antitrust attorney with nearly 30 years of experience that spans roles in private practice, as a general counsel, and with federal antitrust enforcement agencies. He focuses his practice on providing strategic transactional advice and representing clients in the health care and pharmaceutical industries in government investigations and merger reviews.

Monopsony and Health Plan Mergers: Does Anthem-Cigna Signal a Shift in Policy?

Mintz Member and Co-Chair of the firm’s Antitrust Practice Joseph M. Miller co-authored an article published by Competition Policy International on Anthem Inc.’s proposed merger with Cigna Corp. and its implications regarding how the Antitrust Division of the Department of Justice approaches bringing monopsony allegations in the health plan merger context.

The Efficiencies Defense: What Would High Court Do?

Mintz Member and Co-Chair of the firm’s Antitrust Practice Joseph M. Miller co-authored a Law360 expert analysis article on Anthem Inc.’s proposed merger with Cigna Corp. and the appropriate treatment of efficiencies in a merger challenge.

AHLA Annual Meeting: Will Your Deal Be Caught in the Maw of Antitrust Review?

Monopsony and the Labor Exemption

FTC Hearing #2: Monopsony and the State of U.S. Antitrust Law

2018 Hal White Antitrust Conference: The Use of Bargaining Models in Merger Analysis

Managed Care Disputes and Litigation Conference - Antitrust in the Healthcare Industry: Analyzing the Latest Trends and What the Future Holds

Antitrust and the Payer-Provider Relationship: Recent Cases and Implications for Health Plans

Trends in Antitrust and Healthcare Law